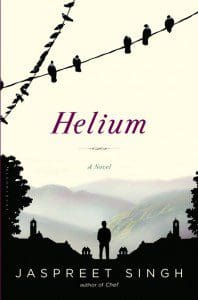 Jaspreet Singh’s second novel, Helium (Bloomsbury; 290 pages), is an intricately layered, meditative journey through recent Indian history. Raj Kumar, a professor of rheology at Cornell, returns to India, his birthplace, to visit his father, who is recovering from an unnamed surgery. Our narrator, however, finds himself quickly sidetracked by the figures and places of his past, and the story turns accordingly backward—and inward. Raj visits his former university at the request of one-time colleagues, and eventually reunites with Nelly, the widowed wife of Professor Singh, an influential figure in Raj’s life, intellectual and otherwise. The memory and image of Professor Singh, murdered during the 1984 Sikh Massacre, haunts Raj and drives him in his quest to find the truth behind one of India’s—and his family’s—biggest tragedies.

His investigations lead him, eventually (or inevitably), back to the figure that initially spurred his return visit: his father. Raj’s examination of the past is not simply that of the historian or detective; it is one characterized by the dedication to cohesion and ruthless exactitude of the trained scientist. In Helium, Singh brings a scientist’s calculating eye to the description and interpretation of events that prove impossibly distant, apparently imperceptible, clouded by the double mists of myth and memory.

The 1984 Sikh Massacre was a series of ultraviolent pogroms that took place over the four days following the assassination of Prime Minister Indira Gandhi. Navigating the details of the massacre, assessing his own sense of involvement, and clarifying the circumstances—and, more importantly, the meaning—of the death of Professor Singh dominate Raj’s story. The style of his narration accounts for much of the appeal of the novel: following Raj’s erudite, associative train of thought is a pleasure, as geopolitical concerns—India’s contentious borders and their brittle colonial origin—evoke for him the unstable physics of plate tectonics and rheology, the “science of deformation and flow.” Rheology reminds him, in turn, of Heraclitus—“everything flows”—and the secret “mechanisms of forgetting […] how the past becomes the past.”


Raj’s scientific background not only informs his larger approach to the world but also colors his language, his descriptive tendencies. He conceives of a man’s constantly shifting accent as like “a superposition of sine and cosine waves,” and imagines the atrocities of the Sikh massacres in terms of heat transfer, chemical transmutation. Raj even critiques Rajiv Gandhi’s famous televised reaction to the pogroms—“when a big tree falls the Earth shakes”—as being not only heartless, morally bankrupt, and worthy of disdain, but an example of “bad physics.” As should be expected, this way of describing the world can prove occasionally tiresome, as when a kitchen counter is said to bear a decoration resembling “aperiodic quasicrystals, lacking translational symmetry.”

Raj’s fluid monologues and scientific metaphors are not the only reason for Helium‘s engrossing storytelling. He is not only the novel’s narrator, but also it’s writer: the novel as such is a collection of his organized “notes” written after the events depicted take place. Thus, Raj’s penchant for experimentation affects the larger form of the novel, which contains a variety of images, texts-within-texts, and other bits of formal playfulness. At one point, Raj reworks a style of writing famously employed by Ludwig Wittgenstein in his Tractatus Logico-Philosophicus to represent “logically” the extent of the government collusion during the Sikh massacre:

1. Prime Minister Rajiv Gandhi enabled the pogrom.
1.1 His crime was as big as the crime of Home Minister Narasimha Rao
1.101 An IAS officer testified: ‘A group of us went to Minister Arun Nehru, demanding the army be brought out. His demeanour was frighteningly casual…’

This section comes soon after the inclusion of a photograph of the first page of Wittgenstein’s Tractatus, which is only one example of the many types of images present in the novel. The images in the text are taken from a variety of sources, ranging from an electron microscope photograph of a volcanic particle to images of anonymous, charred victims of the massacre. Finally, a large portion of the book is taken up by an extensive interview with Nelly, Professor Singh’s widow, in which the “I” of the text shifts completely to her point of view. Nelly recalls, painfully, not the death of her husband but that of her daughter, who, mistaken for a boy, is covered in phosphorus and burned.

While this interview is perhaps one of the most engrossing portions of the novel, Helium actually suffers a rare lapse in intensity as it turns to focus on Raj’s relationship with Nelly. It is revealed early on that Raj and Nelly were lovers, and Raj develops a protectiveness over her which eventually leads him into a few troubling situations. When the novel picks up its pace to describe these situations—Raj’s violent encounters with men he suspects are abusing Nelly—the power of the story dissipates. Raj is an interesting character largely because of his ability to observe, investigate, and interpret, so that when he takes an active hand in the events of his present life— when Raj’s mind takes a backseat to Raj’s actions—the novel loses steam.

Helium, rich with literary allusions, owes perhaps its most substantial stylistic debt to W.G. Sebald, whose first novel, Vertigo, provides the epigraph: “How I wished during those sleepless hours that I belonged to a different nation, or, better still, to none at all.” Deeply felt shame pervades much of Helium: a distaste for patriotism, a passionate disdain for assent by inaction. If Sebald’s The Rings of Saturn tackles the British post-colonial situation from the “inside out”’—that is, through an investigation of the refuse of colonialism contained within a small island that expanded treacherously outward—Singh’s novel does the opposite. Helium looks closely at the post-colonial site itself, at the re-purposed ruins and the messy after-shadow of empire in India. (Raj’s chosen academic field, rheology, also suggests a certain relationship to Sebald’s work: the word’s root, rhea, is Saturn’s second largest moon, complete with its own rings.)

The violence of empire and the postcolonial situation is immediate and disturbing in its extremity and detail. Raj is not a detached observer, an archive-bound academic, but instead an active participant in the disclosure and creation of a meaningful history. “For some unknown reason,” Raj writes, “my mind drifted to my own student days, and I could not help thinking […] about the most harrowing event I ever witnessed.” It is in this mode that the reader is introduced to Professor Singh’s death: Raj, and the reader, will bear witness to the “dark face of history,” without critical distance, without a privileged vantage point. In Helium, to witness is to take part, and to remember an event is not to bring it into the present, but to realize that it has been with you all along.