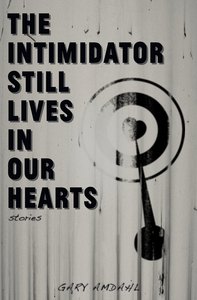 The Intimidator Still Lives in Our Hearts (Artistically Declined Press, 295 pages), the new book from author Gary Amdahl (Visigoths, I Am Death), is a collection of stories that features a startling range of settings and characters (a writer, a bookstore employee, a philosopher, and a gambler, to name a handful). But each story is connected through the philosophical questions Amdahl’s dense, sweeping prose addresses, a trait of serious-mindedness not found in many modern story collections.

Of the book’s nine stories, several feature a first-person narrator, including “Breezeway.” In that piece, the narrator reflects on the breezeway between the garage and the house of his grandparent’s house, the basement of which he lived in as a child. He would frequently sit in the breezeway and think in silence. Looking back through old pictures, he also remembers when his younger brother died, and the effect it had on his family. In one scene, the narrator examines an old picture of himself and a dog, and mentions the foreboding look in his eyes in the photo, indicating something unpleasant would happen to the dog. “That such things happen all the time to everybody fails to alter the character of my grief—that is to say, of inexplicable loss. You can in fact see it in everybody’s eyes: that’s what life is.”


In “The Cold, Cold Water,” Bobby visits a cabin he owns on an island in Lake Superior several times in his adult life, with different groups and different wives. Twice, Bobby nearly drowns in the lake, and believes something draws him to the cold water, though he’s willing to acknowledge after his second near-death experience that “he was alive, and ought not be so foolishly in love with the idea of the end of it.”

“Saddling the Sorry Ass of Self” is an epistolary story about a man who travels through New England betting on Division III hockey games. An existential crisis, though, leads him all the way to Los Angeles, convinced that he’s going to die while he tries to write a book. The question of death is not as dire in this story as it is in some of the collection’s other stories thanks to Amdahl’s skill at shaping the voice of his narrators. The sardonic tone of “Saddling the Sorry Ass of Self” varies greatly from the serious narrator of the “The Breezeway.”

The stories here, some of which are novella-length, also show Amdahl’s tremendous range as a writer. In “We Whistled While We Worked,” teenage girls working in early 20th century mills in Massachusetts spark a labor movement. And in “San Luis el Brujo,” two East Coast women staying at a money-laden Californian coast ranch come to realize the horrors of the outside world are closer to their expensive stay than they realize.

Each story in The Intimidator Still Lives in Our Hearts varies dramatically in terms of time, place, and tone, offering different takes on the same question: What is life? The answer, of course, is never clear.

2 thoughts on “The Question of Existence: Gary Amdahl’s ‘The Intimidator Still Lives in Our Hearts’”