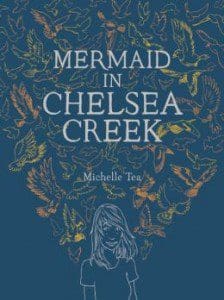 In a post-Twilight, post-Hunger Games world, the Young Adult literary scene is fraught with sparkly neutered vampires, teens struggling against the shackles of their dystopian societies, and bland heroines who are somehow sucked into irritating love triangles. This new YA craze has even spawned a Paranormal Romance sub-section in the Young Adult shelves of Barnes and Noble, crammed tight with the types of book covers you cannot help but judge. There is hope, however, and it comes in the form of Michelle Tea’s newest protagonist, a thirteen-year-old, dirt-layered, scabbed-knee girl named Sophie Swankowski.

In her first installment of a YA trilogy, Mermaid in Chelsea Creek (McSweeney’s Books, 333 pages), Tea, the award-winning author of Valencia and Rose of No Man’s Land,  brings us to Chelsea, Massachusetts, a broken-down town that has seen better days. (Tea wrote a memoir, The Chelsea Whistle, about growing up there, which was published in 2002.) There are girls who play the pass-out game, roving groups of aimless teenage boys, and old immigrant women who left everything behind for a better life, only to end up in Chelsea. It is a hopeless place, but there is a story about a girl who will be able to fix their dark and twisted world, a girl who will bring the magic back. Sophie, with her grubby clothes, strange need to eat straight salt, and visions of a foul-mouthed Polish mermaid, might just be that girl.


Tea successfully sheds new and loving light on what society usually paints as filthy and less desirable. Indeed, nothing may be what people think it is. A grandmother might be a bad witch, a dog might be a grandfather, and a town floozy might actually be possessed by a Dola, who is attempting to get you back on track with your destiny. Chelsea may be run down, but by the end the reader cares for the pot-holed streets, mangy houses, smelly dump, garbage-filled ocean and pollution-rotted creek. Pigeons, those rats with wings that everybody hates, play an integral role in Sophie’s development through the story, morphing from grey, disease-carrying beasts to beautiful orange-eyed birds more befitting of their other name, Rock Dove.

Even Sophie, as she is first introduced, is a less than desirable as a heroine while she gulps down sludgy creek water in front of her germaphobic best and only friend Ella. She is slightly neglected, with dirty tangled hair, grubby clothes and scabbed knees, but her spunk, curiosity and her genuine heart and ability to care for others endear her to the reader.

Another great strength of Tea’s book is her use of narrator. Sophie, with her spunk, curiosity, genuine heart and empathy for others, endears herself to the reader. And while the point of view stays mostly with Sophie, there are many occasions where the perspective shifts briefly into those of other characters, mimicking Sophie’s own power to read people’s hearts and capture their true feelings. This all goes to deepen the characters, and makes it possible for the reader, much like Sophie, to forgive key protagonists for their failings.

Tea’s novel is a refreshing breath of air in the world of YA, equal parts eerie, heartbreaking and fantastical. This modern fairytale harkens back to the wonderful days when the genre wasn’t all about vampires that could frolic in the sunshine.