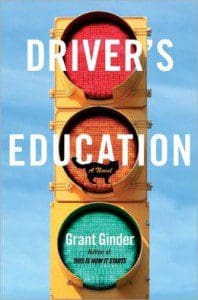 Grant Ginder’s recent novel, Driver’s Education (Simon and Schuster; 256 pages), is a lighthearted story about fathers, sons, and the spirit of adventure. But most of all, it’s a story about story itself. Ginder, author of the novel This Is How It Starts, conjures an exciting cross-country journey, and an even more exciting journey across the lives and memories of a family.

Alastair McPhee is near the end of his life and lives with his son, Colin, in San Francisco. He asks his New Yorker grandson, Finn, for a final favor: Find Lucy, an old car that Alastair drove on his countless travels, and bring her back to him in San Francisco. Finn, an editor for a reality TV show, agrees, and he finds himself in the old ’56 Chevy Bel Air with his friend Randal and a three-legged cat named Mrs. Dalloway, and a map to help him retrace his grandfather’s old travels. Ginder takes his time sending Finn off on his quest—we read through one or two unnecessarily over-described scenes of New York—but once the trip begins it’s engaging, as Finn lives out the experiences from his grandfather’s past, revitalizing Alastair’s memories while also creating his own.


As Finn’s story progresses in the present, Colin takes us into the past. Contemplating his father’s condition, he recalls how he went from his quiet, small town life to becoming a West Coast screenwriter, and how his father had a hand in the transformation, for better and for worse. In the spinning and intertwining stories of these three men’s lives, Ginder examines how stories lived and stories told can influence the stories yet to come.

Through this family of storytellers, Driver’s Education celebrates the power of narrative to make better what is good and make good what is not. Alastair tells elaborate and exaggerated tales; Colin writes his movies; and Finn dresses up the lives of others for his reality TV show. “We do all these things until we turn reality into what everyone wants it to be, until we turn it into something sculpted and spectacular,” Finn says.

Stories told always add to a story experienced. But as Finn makes his way from coast to coast, and the tales of the McPhee family unfold, Ginder forces us to question where the line between a story and a lie is. While Alastair’s tales put a spark into the lives of all the McPhee men, his lies have come at a cost, too. To what extent should a story be rewritten? And what is the cost of telling a beautiful tale?

For the most part an entertaining story of an adventure-packed road trip, Driver’s Education works on a deeper level, too, speaking to the values, aesthetics, and risks involved in telling a good story. Like any road trip, Ginder’s novel has its dull stretches, but it also provides us wonderful travel companions, beautiful sights, unexpected twists, and some good laughs and happy memories.