Lyle claims he can cure faith. I asked him to do it. A year ago I wouldn’t have, I would have paid to believe in anything. Elena gets worse every night, though. She fell asleep in my bed, and I thought she wasn’t breathing because her little three-year-old face was so gray, but it turned out to be nothing but the shadow of the quilt. I moved her stuffed sea lion closer and she rolled over on it, dragging it down to the deep. The doctors just tell me to love her. Someone else suggested I pray, but belief of any kind at this point feels like being rocked in the arms of an insane mother—faith, that great and breaking bough—not with Elena at stake, I’m done with that.

When Lyle gave me his card, I thought it was a joke. It had a picture of a beach on it with that poem about the footsteps. He’d crossed out the words and written: You can be alone again. According to his website, he can extract the finest strands of transcendent hope. That’s what I’m counting on.

I broke down last night and prayed. I thought I felt something and told Lyle. He said it’s natural. Faith is the only gateway to no faith, he says. I asked what he meant and he said that beliefs, all beliefs, are like a series of tunnels.

“What we’re after here is an open road.”

He showed me the room where it’s going to happen. The walls are covered with pictures of Jesus, Shiva, JFK, Osiris, and the Mandelbrot set—each image with a big, black X through it. Lining the windowsill are smaller icons: Einstein, the Dalai Lama, Elvis, Malcolm X, Christopher Hitchens, and a woman fromlate-night infomercials who sells Ever Bliss™ powdered nutrient drinks. Each picture in a cheap plastic frame with the same black X. Lyle had clearly snapped the shot of Hitchens off a TV screen with his phone and the frame had no glass. The Sharpie lines of the X were fading to gray in the sunlight.

“Nobody is pure anything,” Lyle said, “We have to get it all, even beliefs we think don’t count.”

“But it’s not the same thing because if I were capable of any real belief I wouldn’t be here. I’d be gone.”

“Besides,” he said, “I’ll bet you have more faith than you think. In situations like yours it’s usually just spread underground.”

I thought of my Wiccan high school years, and the Marias I could only take in Spanish or Bosnian, and the candles and Mexican rosewater, and the vague authority of humming rocks, shells, and feathers, and cigarette smoke blown in all four directions—Lyle was right. Faith was in me like a curtain behind a curtain. Put a gun to my head and ask me if I believe in anything and I’d point to Elena and say, I don’t believe in a goddamned thing. Not if she’s going to die. But take that gun away? Faith grows back in me like a field of mushrooms. Almost overnight.

“The first thing I need you to do,” Lyle said, “is to write down a history of your beliefs. Like praying you don’t get caught stealing candy. Or calling Christians cowards when you’re drunk. It’s all the same thing, it all has to go.”

“Should I write it on anything special?”


“Write it on anything. That’s the point.”

I started that night. I went all the way back to second grade, when I thought I heard God’s voice in a dream. By the time I fell asleep it was dawn and the bush outside my window was filled with chattering finches. I know now what Lyle means when he says faith and no faith are the same thing. I saw both sides of the coin flipping through the air. He means they come from the same place, believing and hating believers, a single tree, and if you don’t pull out all the roots it grows back.

Elena goes to her dad on Fridays. I don’t get a choice in that. The worst part is that if something happens to her over the weekend, I won’t be there. The idea that I wouldn’t be there when it counted, that I might be out somewhere not even thinking about her when the real stuff happened is just too much. I try not to think about it but I do, all the time. I can’t sleep when she’s gone, and there’s a revival going on down the street. It’s in a vacant lot out there in the weeds, right on the corner. They put up a tent. You can hear the preacher’s voice through the PA echoing off the basketball courts in the park two blocks away. I’ve been hearing it every night. At first it was just annoying. Another thing like gunshots and Greenpeace knocking on your door, stuff you should care about but don’t anymore because it happens all the time. All evening and into the night:

And all the black voices calling it back.

If they had been white I would have called the cops.

Every day I walk through the reedy lot. I see them setting up for the revival. Raking the flattened clumps of grass. Chasing the newspaper tumbleweeds. Bagging the bottles and needles and collecting grocery store circulars, holding them in their hands like garish fans.

They’ve been there all summer.

They yell out all the things that are wrong—

They have a van full of clean white shirts for the converts, and they come in all sizes. I saw a man that weighed over 400 pounds get saved. They wrapped him in white like a baby. No one is banned from the arms of Jesus. I imagine myself in white steeped in the smell of starch and irons and lemon water, and for a second, I’m pretty damn sure that if everybody would just get the hell away from me I could ride this feeling down into forever, this moment of grace, but they don’t and I can’t and it all breaks into smaller and smaller bits, even when they’re already so small you think they can’t, they do. Faith is like entropy, according to Lyle. The heat it gives off is just from decline. It’s not a closed system.

Lyle set up our second consultation at the food court tables by the Orange Julius. He has a face like Eric Clapton’s. You’d never recognize him without context. Both times we met I thought it was a stranger approaching me.

This time Lyle came with diagrams. He set his smoothie down and unfolded a sheet of paper. On it was a genderless human form with tiny lines drawn all over the body. My body.

“I’m thinking we’ll put the needles here.” He took a slug off his Orange Julius and pointed to a series of hash marks. “One for every belief.”

My whole history of hope before me in train trestles and broken rails. I tried to see the pattern, but couldn’t really. Some lines looked like sutures and others more like Amish hex symbols or asterisks.

“Is that the chakra system?”

Lyle looked at me for a second then borrowed a pen and drew another set of lines on the figure. “You should have told me about that one.”

Later on that night, I threw a full can of beer at someone’s head. I was at a show and it was a singer of this band I knew. He was prancing around, doing the Iggy Pop thing, rolling on glass with bloody handprints and finger streaks all over his chest. When he pulled himself up on the microphone stand I threw the beer can as hard as I could. The Pabst logo spun like a ninja shuriken across the heads of the audience. I punched a wall when they threw me out. When I woke up, my knuckles were swollen and there were dried brown streaks of blood on my hand.

After I washed up the next morning, I went to see Elena. She and Silas were eating macaroni and cheese for breakfast when I came in. Her cheeks were sticky with orange sauce. In front of her was a huge, half-drunk glass of milk.

“Is it hormone free?”

“I thought we had an agreement.”

He knows how I feel about those things. I keep Elena away from plastic and fish and she’s never had antibiotics.

“We also had an agreement about you not taking her to the doctor.”

“I didn’t take her right away, I watched her, for a long time. You would have taken her, too.”

Silas looked at me like I were wearing a wristband or a day pass or something. But I’m sick of seeing patience on people’s faces. It doesn’t affect me like it used to. You have to be an advocate. Silas will believe anything a doctor tells him. And the doctors say Elena meets all the developmental markers for her age. They say she’s fine. But she’s not fine. They don’t know her like I do, and so they can’t see what’s happening. She’s changed. I’ve watched her now through countless car crashes, slips on the stairs, through terrible accidents on the playground when the bigger kids on the chain bridge pretend to shoot each other and knock her off. She’s not the same. It’s written all over her. She is going to die. Someday that is going to happen. And even though I don’t know when, I know it will be too soon. 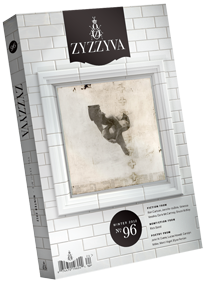 “Christopher Hitchens” by was published in ZYZZYVA No. 96. Purchase the back issue in our shop.