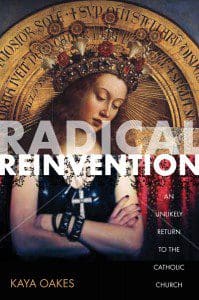 As Kitchen Sink Magazine cofounder, Kaya Oakes makes clear in the prologue to her memoir cum theological summa, Radical Reinvention: An Unlikely Return to the Catholic Church (Counterpoint, 256 pages), “this is not a story of being born again; if I wanted to be an evangelical I could just hop into a church and they’d dip me in a tub and serve me cake.” With this characteristic blend of spiritual sincerity and irreverent wit, Oakes, who is the author of the critically acclaimed book Slanted and Enchanted: The Evolution of Indie Culture (2009), retraces her steps back into her childhood religion in thoughtful, often funny prose.


Oakes structures her approachable memoir around the rituals she undertakes to return to Catholicism: from welcome packs of photocopied articles stating Catholics have more fun to confessing for the first time in decades to going on pilgrimage to Rome. She arranges personal anecdotes, church history, religious politics, searing introspection, and a decidedly individual interpretation of Catholic worship (praying to “St. Bob Dylan,” for instance) into a vivid, fluid chorus that continuously affirms the humanity of the memoirist.

Oakes, who is also the author of the poetry collection Telegraph, perceives her desires to reconnect with the Church as contradictory: “I wanted a relationship with God in a community, but I didn’t want it to make me into some kind of Bible-thumping right-wing moron.” She takes the unusual step among (usually Protestant) Christian memoirists of presenting this paradox not as a problem to be solved, but rather as a mystery to be explored. Conversion memoirs generally start with an assumption that something’s wrong with you that God’s going to fix through some sort of mystifying psychological rejiggering. Oakes’s memoir addresses her doubts about her self-worth as a “sinner” and “heretic,” as well as her feelings about turning to God to see if she’ll be rejected, and she describes what a “relationship with God” actually feels like in concrete, of-this-world terms. “God is in long conversations with friends, primarily unbelievers. God is definitely in my favorite food: cheese. God is in a good day of teaching; God is in the moments when I’m about to start beating up on myself and abruptly decide it’s a waste of time.”

Oakes turns the typical conceit of the conversion memoir – your self-concept as a generally decent and capable person is an illusion and you need God – on its head: your self-concept as a fuck-up is an illusion; God accepts you as you are, believes your happiness is important, and expects you to work on being kinder to yourself and others. The result is a fascinating window into the world of belief that doesn’t lead the reader to a foregone conclusion about the nature of God or Christianity. Radical Reinvention is a welcome relief to the however thickly veiled proselytizing religious memoir: overall a Bay Area charmer, replete with pitch-perfect detail of an interesting life.

Kaya Oakes will be reading from Radical Reinvention at the Booksmith in San Francisco on August 8.