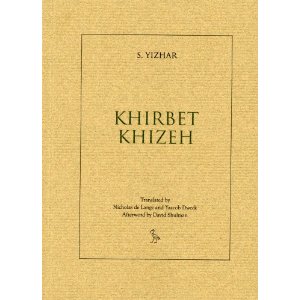 A few years ago, blogging for another consonant-heavy literary magazine, I put my Comparative Literature degree to use in compiling a series of reading lists (Readings for Revolution and Readings for the Next Intifada, for example) composed to serve as introductions to various countries and conflicts in the Middle East. Since then, I’ve done my best to keep up with recent trends in Hebrew and Arabic literature and have discovered a couple writers who might merit a revision of said lists (the Libyan novelist Hisham Matar, for example). But it has been a long time since I came across a book that helped me see the Middle East with fresh eyes. It has been a long time since I’ve read a novel as searing and immediate as S. Yizhar’s Khirbet Khizeh. It’s particularly amazing that the book remains so urgent more than sixty years after it was first published, in the aftermath of the 1948 war known to Israelis as the War of Independence and to Palestinians as al-Nakba.

In his afterward to the book’s English translation, Hebrew University professor David Shulman writes that “Khirbet Khizeh is a canonical text, a masterpiece of modern Hebrew prose and, in theory, still an optional part of the standard curriculum in Israeli high school.” A lyrical, meditative account of one of the most important and mythologized moments in Israeli history, the novel echoes with sounds of Babel, Joyce, and the prophets. Take, for example, the unflinching honesty of this passage, in which the narrator and his army unit enter a Palestinian village called Khirbet Khizeh.


“The sun grew hotter and the day strengthened its pleasant hold upon the valley. I don’t know why a feeling of loneliness suddenly thickened in me. The right thing would be to leave all this now and go home. We were sick of missions operations and objectives. And all these stinking Arabs, sneaking back to eke out their miserable existence in their godforsaken villages—they were disgusting, infuriatingly disgusting—what did we have to do with them, what did our young fleeting lives have to do with their flea-bitten desolate suffocating villages? If we still had to fight, we should fight and get it over with.  If the fighting was over then we should go home. It was unbearable to be doing neither one nor the other. These empty, godforsaken villages were already getting on our nerves. Once villages were something you attacked and took by storm. Today they were nothing but gaping emptiness screaming out with a silence that was at once evil and sad.”

After strafing the village with machine gun fire and going house to house, the narrator describes the humanity massed at a so-called collection point—“women with babies in their arms,” “a few old men walking silently and solemnly as though towards Judgement Day,” and “a blind man, led by a child, perhaps his grandson, who walked along looking around him in bewilderment and curiosity”—all the while struggling to put his thoughts into words.

“And with all these blind, lame, old, stumbling people, and the women and children all together like some place in the Bible that describes something like this, I don’t remember where—in addition to this bit of the Bible, which was already weighing on our hearts, we now reached an open place in which there stood a wide-spreading sycamore tree under which we saw sitting in a huddle the entire population of the village, gathered in silence, a great dappled mass, all collected together, a single silent assembly following what was happening with their eyes, one of them occasionally sighing, ‘O dear God.’ ”

The narrator finds the words he was searching for near the end of the novel, as he watches his unit load the villagers onto trucks, which will transport them across the newly created border. “All at once everything seemed to mean something different, more precisely: exile. This was exile. This was what exile was like. This was what exile looked like.” A few pages later, the narrator imagines a future Khirbet Khizeh populated by Jews. “We’d open a cooperative store, establish a school, maybe even a synagogue. … Who, then, would ever imagine that once there had been some Khirbet Khizeh that we emptied out and took for ourselves. We came, we shot, we burned; we blew up, expelled, drove out, and sent into exile.” With a conclusion like this, it’s no surprise that Khirbet Khizeh was the source of fierce controversy when it was first published in 1949, and again in 1978, when it was turned into a TV movie.

And one should not be surprised, perhaps, that it took sixty years for the novel to be translated into English. (Kudos to MacArthur fellows Peter Cole and Adina Hoffman, and their Jerusalem-based Ibis Editions, for publishing the novel, and to Nicholas de Lange and Yaacob Dweck for their beautiful translation.) Khirbet Khizeh may be difficult and it may be challenging, but we should not shy away from those things we find difficult and challenging, the messy truths that unravel our mythologies. Whatever you call the events of 1948, if you call them anything, this is an amazing novel, a testament to humanity in the midst of war. It is a war novel whose power derives from the lyricism of its prose and the subtle, very human complexity of the narrator’s response to what he has witnessed. For that alone, Khirbet Khizeh deserves to be placed on a list of its own.