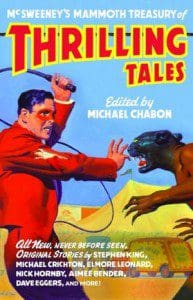 It was the first day of my first Advanced Fiction workshop. Everyone was fiddling with their pens and eyeing each other across the long oak table. As she handed out syllabi, our professor extolled the virtues of experimentation and articulated a staunchly ecumenical approach to writing. With one exception, of course. If any of us were interested in writing science fiction, fantasy, or mystery, she would be happy to introduce us to her dear friend over at MIT, who knew everything there was to know about genre fiction. The implication was loud and clear: some of her best friends wrote genre fiction, but such work was not welcome in this Advanced Fiction workshop. At that point, my own writing was about as far from genre as one could imagine. Still, the comment struck me as unnecessarily discriminatory, particularly in a creative writing department that so prided itself on experimentation. I’m still not entirely sure why the professor felt compelled to articulate this bias (especially after hand-picking the class), though I imagine it had something to do with strengthening the bulwarks between high and low culture.


Later that same semester I came across a recent issue (Issue 10) of McSweeney’s Quarterly. Guest-edited by Michael Chabon, the issue was dedicated to reviving genre and genre-inspired fiction, fiction that looked beyond “the contemporary, quotidian, plotless, moment-of-truth revelatory story.” Reading McSweeney’s Mammoth Treasury of Thrilling Tales—as the issue is called—was a moment-of-truth for me, and for hundreds of other young writers. If we still have literature scholars fifty years from now, I have no doubt that they will look back on this volume as an inflection point in the path of American literature, the point at which a generation of writers abandoned the castle of literary realism and engaged in earnest with the genres. Sure, such cross- pollination existed before the turn of the millennium. Our future scholars might also cite Thomas Pynchon’s The Crying of Lot 49, Jonathan Lethem’s Motherless Brooklyn, Colson Whitehead’s The Intuitionist, or a load of other genre-bending forbearers. But for Chabon, the recently anointed Pulitzer Prize-winner, to articulate such a radical ideology was, I would argue, a revelation that opened the floodgates to a rush of debut de siècle literary experimentation.

In the past ten years, former realists such as Michael Cunningham, Kazou Ishiguro, Junot Diaz, Gary Shteyngart, and Tom Perrotta have joined Colson Whitehead, Jonathan Lethem, Thomas Pynchon and many others in the great meadow of cross-genre pollination. In an age of handheld tablets, commercial space travel, and nano neuro-knitting, an age in which the dreams of the past have become prosaic reality, it’s not surprising that literary realism would intersect with science fiction and other genres. Of course, there are still many opponents of genre-miscegenation. You can just hear the distaste in James Wood’s review of David Mitchell’s literary historical novel The Thousand Summers of Jacob de Zoot. “The historical novel, typically the province of genre gardeners and conservative populists, has become an unlikely laboratory for serious writers, some of them distinctly untraditional in emphasis and concern. … What such novelists are looking for in those oldfangled laboratories is sometimes mysterious to me.” Mysterious perhaps, but no one can deny that “serious” literary writers are turning to genre fiction in droves.

I myself have tinkered in that oldfangled laboratory. My first novel, The Oracle of Stamboul, was written with the conventions of historical fiction firmly in mind. And the experience left me hungry for more. My next project continues along in the historical fabulist vein—it’s a somewhat magical multigenerational novel about the Jews of Cairo. Beyond that, I’m thinking of something a bit more science fiction-y, the future instead of the past. Writing about the future, however, I am at a distinct disadvantage. While many writers grew up reading comic books and science fiction, I spent most of my childhood behind a strange mix of Mad Magazine and Dickens. The only science fiction I encountered was in the classroom: Ray Bradbury, Aldous Huxley, H.G. Wells, and the like. Thus, I have decided to embark on a mission to read the classics of science fiction. I began my journey with Isaac Asimov’s Foundation series and intend to continue with Frank Herbert, Philip K. Dick, Ursula LeGuin, Samuel Delany, Orson Scott Card, Octavia Butler, Kim Stanley Robinson, William Gibson, and beyond. I hesitate to make any judgments so early in my travels, but I will say that I thoroughly enjoyed Asimov. I loved his engagement with history, was amazed by his vision of the future, and turned pages like there was no tomorrow. At the same time, I do wish he had spent a bit more time polishing his prose and refining his characters. But that’s the point of cross-pollination, right? It makes everything stronger.