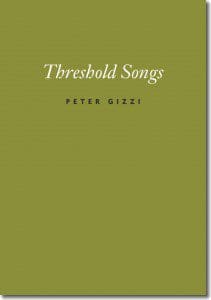 In Peter Gizzi’s fifth and newest poetry collection, Threshold Songs (Wesleyan University Press, 108 pages), the poem serves as a place where Gizzi can “talk / to myself through you.” He asks, “what does it mean / to be tough / or to write a poem / I mean the whole / vortex of home / buckling inside.” The collection is a place where Gizzi can articulate the “aboutness” of language, the interval between discursive sounds. This place both urges speech and thwarts the compulsion; it’s the gap where poetry is invented internally and is exonerated externally.

Gizzi is very good at combining a streetwise vocal with the structure of high lyric or “song.” The syntax and line breaks tumble around each other but maintain a sensible and surprising pattern of rhythm and image, blurring the boundary between song and plain utterance. In “Lullaby,” he writes

Poems such as that one, which read like a cubist’s elision of the senses, evoke playfulness and freedom. The highly agile lines are shaped by rhythm and not syntax, allowing Gizzi to take us to where speech and song and silence all overlap. He uses descriptions and metaphors of struggle (“we are all stranded on the shore of something // I mean to say seeing pictures inside as they are.”) to give a sense of that vulnerable moment from which utterance of song and image begins and ends.

Though the poems here hinge on rhythm, abstract concepts and “poetic inspiration” are held in high regard. And Gizzi does an excellent job combining forms and deliveries to achieve a yearning-song that always seems to be bursting with surprise at the level of line.

He molds into interesting vessels the various themes of Threshold Songs, the most interesting being the idea of language as both a human artifact and a human stand-in. In the book’s second section of poems, this is represented in the image of the communicating figure that remains silent — an excellent choice for clearly and drastically conveying the struggle of language. “Away in itself a way out of here // of transport panning the scene or skein of sight / the syncoflash of being sparrow.” Later, Pinocchio serves as a kind of wooden embodiment of this idea: a man-made temporary thing (built with care) that’s also an innocent victim of the dangers of the world, brought into a place where pure utterance is always under threat of being stopped-up: “All the world’s a stooge. The secret and silent world worn from abuse and those surfaces abrading imagination.”

But air itself is the book’s most common “vessel.” Air serves as a fluid space for possible sound to carry. Air can be a medium itself, in this sense, a blizzard-like arena where the starkest breaths go up into the atmosphere. Gizzi writes, “But the empty center / of whitish marks / its indelible air / arctic and sharp / whizzes through me,” and then later, “Speak world / glower and burn / and illumine your fancy / these moments rouse.” Ultimately this collection does for itself what a portrait should do for the artist: it releases a primary vocalization of the figure at all times, one, ideally, out of time and space.