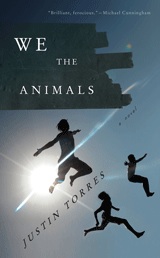 Justin Torres’ first novel, We the Animals (Houghton Mifflin Harcourt, 144 pages), carries all the balm and hazard of strong waves at high tide. Told through the eyes of the youngest of three brothers, the novel evokes the experience of youth and the struggles of a poor family from Brooklyn living in upstate New York. Through his enveloping and fast-paced prose, Torres bestows his story with a rare generosity and honesty, portraying the family’s jagged love – with all its cruelty, beauty, tenderness, and loyalty – and chronicling the events leading to the family’s calamitous fragmentation.

Torres, who lives in San Francisco, constructs his larger story by focusing on how the narrator collides with and detours around the harsh realities besieging the family. At first, the boy’s evasions appear to be some form of coping mechanism, in which he uses fantasy to deal with hardship and abuse. For example, when his parents fight, he and one of his brothers retreat to a crawl space where they “sharpened popsicle sticks into points, preparing for war.” But as the novel’s title would suggest, these fantasies are more than a coping mechanism; the boy sees his family as a pack of animals whose savage instincts are thinly veiled. This nascent belief lingers into his teen years where it mingles with an emerging sexuality no less alloyed with violence and fantasy. In the book’s climax, when the narrator reveals himself as much the animal he has claimed to be, his family’s concerned response suggests the narrator might be alone in harboring such ferocity. We the Animals then is not a story about “we” the family of animals, but about the “we” who internalize brutality, who bond with it, who thereafter “dream of standing upright, of uncurled knuckles, … strolling gaily, with an upright air.”


Among the many traits that singularize Torres’s novel from other coming-of-age stories are its structure and its efficient, powerful prose. The language is both tactile and abstract, like music (“we were safe as seed wrapped up in the fist of God.”). Most chapters in the book span only a few pages, yet within those pages Torres navigates the tumultuous terrain of whole emotional continents. This combination of breadth and brevity lends the book a poetic air, ameliorating its unvarying tone or weight.

And each of the chapters is self-contained, frequently beginning and ending without reference to events from other parts of the story. Yet Torres crafts a deliciously covert escalation of tension, never muddying the plot, using this method to create an ultimately haunting and beautiful atmosphere, one like hearing in the distance the moan of a train whistle at midnight.