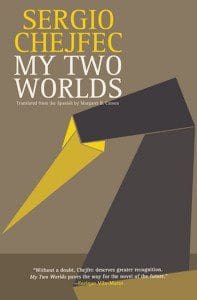 My faith in reading — shattered by texting, an increasingly illiterate America, and The Real Housewives of Beverly Hills — has been restored by a book about a walk in the park.

Sergio Chejfec‘s My Two Worlds (Open Letter Books; 120 pages), translated by Margaret B. Carson, concerns itself with one walk in one park: a green expanse in the unnamed Brazilian town where Chefjec, a visiting Argentine academic, is attending a literary festival where he imagines himself looking “like a fugitive trying to blend in.” Consulting a map, seeing that green spot, he feels his heart race:

“For me parks are good when, first of all, they’re not impeccable, and when solitude has appropriated them in such a way that solitude itself becomes an emblem, a defining trait for walkers … who in my opinion should be irrevocably lost or absorbed in thought, and a bit confused.”

Chejfec is a walker. Not in a cardiovascular sense but for the sheer archaic thrill of wandering. Even as a child able only to walk around his own block, he already keenly “sensed that the main argument in favor of walking was its pace; it was optimal for observation and thought, and furthermore, it was the corporeal experience with the best syntax to accompany one in life. But I’m afraid I can’t be sure.”

It is passages like that, right down to their slightly affected uncertainty, that find me staring rootedly down at the pages of this volume, half-convinced that I wrote them myself. This book reads my mind. Chejfec and I are both authors, both walkers, both loners, both dreamy watchful space cadets who trust only those aspects of the world (if even those) that can be seen from sidewalks. Even a short stroll is for us a valiant pursuit of history:


“Searching through urban landscapes for traces of the past [is] a great and irresistible weakness.” Wandering a world built and rebuilt ever more soullessly, “I go looking for things that can’t be found, are basically invisible, or don’t exist.” In this strip-mall-and Big Mac world, he and I ache over the vanquishment of history by a particularly vicious present bent on first making the past look ludicrous and cruel, then erasing it without a trace.

Reaching the park, Chejfec roams its paths, gazes at its fountain, mulls the origin of species at its aviary, and suspects that the swan-shaped pedal boats in its lake are watching him with ill intent. He and I, antisocial at heart, know all too well that inanimate objects think, watch, wish and plot.

As Chejfec wanders, he wonders. Circling again and again those ever-shifting clues to the meaning of life, he speculates. Watching strangers gives him the almost holy opportunity “to glimpse the net weight of a normal life, of my life” and examine “the skein of a person’s acts, whether unnoticed, essential or absurd, which range from the unconfessable to the naïve.”

The park is real, yet it’s a stand-in for the larger world, including both heaven and earth. As in real life, now and then phantasms intrude: a seeming ghost scrambling away under a tree, carp rising to the surface of the lake when Chejfec speaks.

Watching the fountain makes him feel omniscient. He deems a palm tree “autistic.” Everything intrigues him, which is why (again) we are twin souls.

He writes the way a walker walks: gliding. Halting. Gliding again. Aimless. Absorbed. You’ve heard of slow food. Chejfec advocates, without quite saying so, slow life. At a wanderer’s pace, impressions conjure memories, philosophies, epiphanies. This book is an instructional manual for the human mind as it was when we had attention spans.

These days we are no longer permitted to wander aimlessly, except online. But even then, impressions arise not spontaneously but by corporate design, forced on us full-strength, rapid-fire by those who want our money and our minds.

All too aware of this, Chejfec yearns for “the past, when walkers felt reunited with something that was revealed only during the course of the walk. … I never discovered anything, only a vague idea of what was new and different, and fleeting at that. I now think I went on walks to experience a specific type of anxiety, one that I’ll call nostalgic anxiety, or empty nostalgia.”

For all its perverse, profound magic, this book is not without its annoying affectations. Chejfec pocks his narrative with “or so I thought” and “at least that’s how it seems to me” so frequently that it becomes pretentious. First-person writing is tricky this way: Catchphrases quickly cross the line from spontaneity to self-indulgence.

In its last few pages, the narrative wanders off into a memory that feels irrelevant and removed — and never comes back. This too grates, until you realize that walks themselves work out that way sometimes: Reaching an anodyne or ugly destination, you ask: Why? Then you remind yourself: It’s all about the journey, all about the walk.

These days I find myself saying a lot that books are vanishing. Books like this which allow obscure authors in distant lands to detail what the world would call completely insignificant events are virtually obsolete. Yet My Two Worlds leaps into your hands like a living artifact, a refugee.

Any book that matters boils down to What’s the meaning of life? The answer almost certainly lies in long walks down dusty paths deep inside cities, there among the palms and swan-shaped pedal boats.