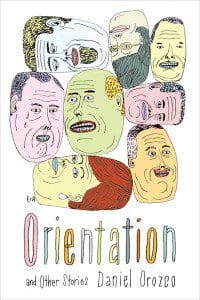 Back in the mid-‘90s, Story (the late and lamented journal dedicated to short fiction) published an arresting work by Daniel Orozco titled “The Bridge.” A young man joins the veteran crew responsible for maintaining the Golden Gate Bridge. The older guys, all of whom go by nicknames, decide to call the new guy Baby. As Orozco gracefully settles us into this unfamiliar world of risky if unglamorous work, something happens to Baby:

“He spots the trouble right away, at the east end, just over his head – a section of hose hung up between the power line and the scaffold cable. He reaches up, stands on his toes, and leans out a little, his hips high against the railing. He grasps the hose, snaps it once, twice, three times until it clears. And just as he’s turning around to give Whale the thumbs-up, a woman appears before him, inches from his face. She passes into and out of his view in less than two seconds. But in Baby’s memory, she would be a woman floating, suspended in the flat light and the gray, swirling mist.


“The witnesses said she dived off the bridge headfirst. They said she was walking along when she suddenly dropped her book bag and scrambled onto the guardrail, balancing on the top rail for a moment, arms over her head, then bouncing once from bended knees and disappearing over the side. It happened so fast, according to one witness. It was a perfect dive, according to another.

“But her trajectory was poor. Too close to the bridge, her foot smashed against a beam, spinning her around and pointing her feet and legs downward. She was looking at Baby as she went past him, apparently just as surprised to see him as he was to see her. She was looking into his face, into his eyes, her arms upstretched, drawing him to her as she dropped away.”

At the time “The Bridge” was published, Orozco was just beginning his career as a writer. Yet “The Bridge,” along with another piece for Story, “Hunger Tales,” a quartet of vignettes on the torment and the comfort of food, revealed a fantastic talent, one with an enviable facility for smoothly shuffling points of view, for concisely rendering characters, for effectively compressing and elongating time. The stories have a depth belied by their page counts. Above all, they’re animated by a sensibility capable of detailing the noble and the mysterious in the average working man and woman’s life (which is to say, the existences of the vast majority of us). A collection of his stories couldn’t come soon enough.

More than 15 years later, Daniel Orozco’s first story collection, Orientation and Other Stories (Faber & Faber; 162 pages), has arrived. These nine stories deliver on the promise shown back in Story. If anything, they show that Orozco’s range is so much greater than could have been guessed back in 1995. His justly lauded story, “Somoza’s Dream,” is a thrilling albeit horrific recounting of a Nicaraguan dictator’s final days in exile, and a distillation of how unquestioned power sows contempt and grotesquerie. His office romance, “Officers Weep,” gleefully plays with that most deadpan of forms – the police log – and strings a funny, moving narrative of dalliance and danger from it. And “Temporary Stories” is one of the most perceptive narratives written in a long time on how easy  it can be to disconnect yourself from others, to narrow this world to doing your job as perfectly as possible, taking solitary lunches, and communing with your fellow man only in anonymous remove, such as in the warm crush of a bus commute.

Throughout, Orozco entertains at least two if not universal then distinctly American preoccupations: work and food. Supermarkets, breakfasts, snacks, and all kinds of nourishment crop up as unobtrusively and regularly as freeway signs, as do cubicles, break rooms, spreadsheets, and co-workers. He then dazzles us (sometimes with insight that rings like a cold slap, or wisdom that radiates with unexpected beauty) by showing how we come to understand love and death around each looming job task and through every bite of sustenance.

Nobody else is writing quite like Orozco. These are bracing stories. Rich with wicked humor and loving toughness, they refuse to offer false solace but still celebrate the struggles of the otherwise mocked. And then, as those passages from “The Bridge” attest, there’s the sheer loveliness of the writing. Nothing wasted, nothing overlooked. It takes years and years to be able to do that. Then you get something as fine as Daniel Orozco’s Orientation.

One thought on “Food and Work, Love and Death: Daniel Orozco’s ‘Orientation and Other Stories’”