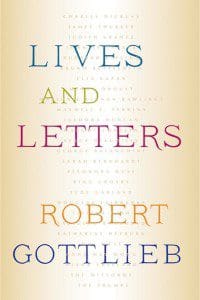 While a good number of undying cultural giants (Harry Houdini, Judy Garland, Charles Dickens) receive coverage in Lives and Letters (Farrar, Straus and Giroux, 426 pages), Robert Gottlieb’s collection of biographical profiles largely takes up the lives of once household names and worldwide phenomena who, for one reason or another, failed to achieve lasting impact beyond their generation. Douglas Fairbanks, Minou Drouet, anyone?

Indeed, many generations have passed since the heyday of most of Gottlieb’s subjects (the median cultural peak is somewhere around 1930, with Princess Diana and Scott Peterson being the only real “household names” of the 21st century). Given this particular scope, Lives and Letters was bound to please the folks who were “there,” give or take a generation. The real value of this book is its ability to make those of us firmly planted “here” take interest in these severely dated and faded stars.


In “Lives,” the first half of the book (the second part, “Letters,” deals mainly with what Gottlieb calls “literary phenomena,” though all of the pieces here were originally commissioned as essays on various biographies), Gottlieb succeeds perfectly in conveying the cultural impact of his subjects without resorting to “remember whens.” He relies instead on his eye for the truly relevant focal points of a person’s life and on his direct, unsparing prose. (Two of Gottlieb’s most often-leveled criticisms are aimed at the production of “hagiographies” – biographies that make their subjects into saints – and the use of florid or overly academic language; the effectiveness of Lives and Letters is testimony against both).

While Gottlieb’s writing is unsentimental, that is not to say he is detached. He reveals a deep passion for both the subjects (he acknowledges brushing elbows and in some cases being friends with many of them) and the art of biography itself – something he clearly holds dear. (He has devoted a sizeable chunk of his editing career to it). Indeed, he often seems to take personal offence to the continued release of what he considers to be superfluous or substandard biographies on a given person. (He sometimes points out how much better the biographies he edited on the same subject are.) Gottlieb’s prefacing assurance that “I didn’t proceed from a personal agenda or formal purpose” notwithstanding, one wonders if the “case closed” tone he pervasively adopts reveals a desire for his profiles to serve as authoritative bookends to overharvested biographical projects, that it’s his effort to rescue his beloved subjects from more petty publishers.

Perhaps the most oddly betraying tendency in Lives and Letters is Gottlieb’s attitude – it could even be called an obsession – toward sex. “Prurience,” the unnecessary delving into a subject’s sex life, is another of Gottlieb’s general reproaches against biographies. Yet his accusations of prurience are followed by gleeful reproductions of the blush-inducing content in question, which then takes up a much larger percentage of Gottlieb’s piece than the passage could have possibly occupied in the biography. Margot Fonteyn’s exceptional muscle control, Porfirio Rubirosa’s formidable endowment and the indelible image of Judy Garland being made to sing “Somewhere Over the Rainbow” post-fellatio now take front and center stage when recollecting those profiles. In Gottlieb’s piece on the Duke and Duchess of Windsor (and the third party in the bedroom, Jimmy Donohue) he seconds biographer Christopher Wilson’s proposition that there is “a vital need” for prurience as far as these particular Royals are concerned. “I second that emotion,” Gottlieb writes, “and I’m sure you do, too, so let’s delve right in after him.”

It is both apt and telling that Gottlieb characterizes this “vital need” as an emotion. Gottlieb clearly knows that sex and intrigue are inseparable bedfellows. When the former dries up in the “Letters” half of his book, so quickly does the latter. It’s hard to imagine anyone taking much interest in the sweet and honorable (and platonic) friendship that developed between Marjorie Rawlings and Maxwell Perkins, “the most respected and honored editor in American publishing history.” The “Letters” portion does have its gems – the pieces on Dickens and Steinbeck are illuminating; they just don’t grab you by the … collar … quite in the way his earlier ones do.

In the end, what unwittingly emerges throughout Gottlieb’s writings is a portrait of a proud, earnest man – worthy of a biography himself, perhaps. This is a first-rate collection of profiles that spare no detail, resist the tendency to simplify or de-eroticize their subjects’ psyches, and render utterly alive the early-mid twentieth century performing arts world.