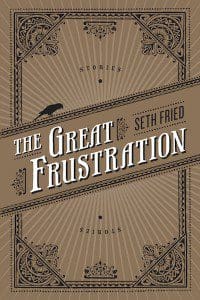 In Seth Fried’s The Great Frustration (Soft Skull Press; 192 pages), strangeness and morbidity are the rules, not the exceptions. Through a pastiche of bizarre worlds and landscapes separated by only one or two degrees from our own (which is, of course, already thoroughly frightening) Fried fashions telling scenarios and the nightmarish half-realities in which they occur. Deftly evoking a familiarity before diving into fantastical realms, the stories in this collection exhibit a surprising wealth of ideas belied by Fried’s spare prose.

“Frost Mountain Picnic Massacre,” a paralyzing allegory of modern-day groupthink, brings into plain view the ubiquity of violence in modern life: year after year, the residents of Frost Mountain gather for a traditional picnic — cotton candy, amusement rides, raffles, games, and everything else Americana — only to be struck, again and again, by lethal attacks. Despite the predictable continuity of harm, the townspeople return to be killed and maimed. Or, if they are lucky enough to live, their despair translates into a furious but ultimately futile activism. Downtrodden, the aging residents try to convince their children, the next generation, of the truth about the annual bloodbath of an event.


But Fried grants them no such luck, foregoing happy endings for more accurate allegories. As the collection progresses, Fried’s dark lampoon expands to encompass a variety of other themes in its freaky snow-globe — sexual angst, power structures, obligation, obsession, oligarchy, xenophobia, corporate culture, imperialism, time, and mortality. At rare times, the collection’s various messages yank the focus from aesthetic craftsmanship, leaving the faint smell of didacticism. But the book still completes its comprehensive arc, running smoothly on blood-oiled wheels.

Nothing is sacred; humankind’s quest for basic meaning and a narrative that implies the discovery of some ultimate truth at life’s end both get the scalpel. Not even small children are spared. In one story, a girl is torn apart by apes; in another, eaten alive. Furniture is thrown, heads decapitated, uncles mangled in farm equipment. Sometimes, Fried is content to just point to a lit fuse. No further pyrotechnics are necessary. “The Great Frustration,” the eponymous story in the book, depicts the prelude of awkward silence before an explosion into mayhem. In the Garden of Eden, the animals co-exist in what appears to be peace. Upon closer inspection, though, such peace is no more than a petrifying and entombing tension: each animal regards its successor on the food chain with a mixture of desire and imposed respect. In this Eden, where primal urges and social obligations duel, there’s no assurance that free will even exists. The gore is only imagined — for now.

Instead of showing strength with one type of stylistic approach and petering out in another, The Great Frustration is well balanced, not reaching too far toward one end — magical realism, with its mirror-inverted worlds and dreamland sequences – or the other: realism itself. In stories ranging in average length to flash-fiction brevity, Fried renders both mundane and mythical backdrops (such as the war-torn and corpse-riddled city of “The Siege”) with a convincing, almost eerie lucidity. He also deploys a subtle and well-placed sense of humor throughout. Serving as release vents for the pent-up steam of his horrific scenarios, these bits of droll hilarity leaven the collection’s fundamentally tragic sentiment. At the core of that sentiment is a disappointment: in natural processes, in other people, in the way the architecture of achievement never really turns out how it’s supposed to. Fried’s narrators reiterate this vibe of being lost and alone in a space where meaning is relative. In “The Scribes’ Lament,” he takes this idea to task in a parody of written history’s transcription, noting it’s as frequently created as it is copied.

The book’s final and capstone story, which concludes the notion of science-as-parable beginning with the collection’s first piece, “Loeka,” embodies The Great Frustration’s overriding sensibility. Read as a taxonomy of supernatural creatures worthy of Lewis Carroll,  “Animalcula: A Young Scientist’s Guide to New Creatures” offers a series of brief, brilliant vignettes that make allegories of everything from the nature of emotion and the clockwork of the universe to the very act of observation. Weirdly wonderful, Fried’s story collection inhabits equally the philosophical and the visceral. “It is the same thin, watery membrane that separates fact from illusion,” Fried writes in “Animalcula,” describing a cryptid unable to be seen but loved intensely by all who study it. “It is that border between the real and the imagined world, which manages to create such a paradox of distance.”

One thought on “Seth Fried’s ‘The Great Frustration’: Alternate Realities and Bloody Allegories”