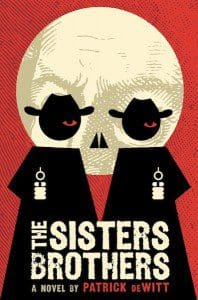 Early on in Patrick deWitt’s new novel, The Sisters Brothers (Ecco/HarperCollins; 328 pages), a grotesque old woman strings beads onto a piece of wire as the book’s titular brothers, Eli and Charlie Sisters, watch from across the room. Having taken refuge in her eerie cabin, they are repulsed by the “long gray hairs quivering from her chin” and the way her dented skull “caves in like an old piece of fruit.”

When the brothers awake the next morning, the witch has left, but the beads have been fixed above the cabin door. Determining them to be an evil spell, Eli and Charlie decide to flee through a window to avoid passing underneath the curse. But then Eli is forced to run under the beads to save his horse from an attacking bear – an unsubtle bit of foreshadowing that nevertheless leaves the reader with an uneasy feeling over what’s to come.

Although the scene goes largely unacknowledged again for the rest of the narrative, the witch’s curse looms over this often darkly hilarious novel, which follows the brothers along their voyage from Oregon City to San Francisco during the height of the California Gold Rush. A pair of hit men living on the fringes of the new frontier, Eli and Charlie have been hired to find and kill Hermann Kermit Warm, a man who has committed some unknown wrong against the brothers’ mysterious boss, the Commodore. Just as the evil beads would portend, the journey is filled with misadventure.


Narrated by a wiser Eli, long after the turbulent events depicted in the novel have had time to settle, the story is interspersed with plaintive meditations on Eli’s yearning for a simpler life — one in which he owns a general store and has a good woman, for example, or one where the crude, matter-of-fact killings demanded of him are not accepted as commonplace.

Eli’s budding humanity lies in sharp contrast to deWitt’s depiction of Charlie, who kills with the same nonchalance as he drinks brandy — that is to say, frequently and without care for the consequences. That contrast serves as a fascinating source of tension throughout the book, one that allows deWitt to explore some of the novel’s larger themes, such as the limits to the bonds of brotherly love or the practicality of living a life realized fully by one’s true desires.

But the novel is not dominated by Eli’s philosophizing. In fact, the book is often at its best in the heat of action, and there are plenty of riveting scenarios to go around.  The brothers find themselves caught in a tense standoff with a crazed gold miner; belligerently drunk with a fur-trapping pimp and his band of aggressive prostitutes; and arguing passionately with a young boy and his father while witnessing a duel.  These scenes and the many others like them are buoyed by deWitt’s masterful sense of timing (the novel is structured into three parts, which are made up of brisk, episodic chapters) and the consistent hilariousness of the dialogue.

There are times, especially in the novel’s first two parts, when the book almost devolves into quixotic farce, as the adventures and violence become so outlandish as to be nearly unbelievable. But deWitt knows his limits and has an impressive ability to step back from the cliff of hyperbole and self-indulgence. Just as the reader begins to suspect the narrative will soon derail, the author swoops in and saves the novel from morphing into a parody of the Western. Rather, deWitt welcomingly reimagines the genre.