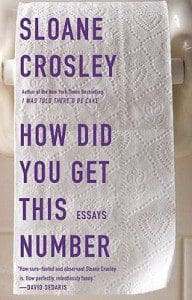 In a recent interview with FiveBooks, Woody Allen lamented the current scarcity of outlets for comic writing in the grand tradition of James Thurber and Dorothy Parker. It’s an absence most readers may not usually feel until, that is, we run into a snort out-loud, serio-comic, utterly enthralling collection of essays by Sloane Crosley. At which point we have to ask, How have we managed without a weekly dose, and where can we find more?

Crosley’s second book of essays, How Did You Get This Number (now available in paperback), picks up on some of the themes (life in Manhattan, childhood in suburbia) from her first collection, I Was Told There’d Be Cake, and broadens the scope of experience and observation to Paris, Alaska, and Portugal, all told in the same engaging voice — wry, honest, eccentric — that charmed us before. While traveling alone in Portugal, she observes that “While the emotional sum total of my trip would eventually add up to happiness, … hidden between the cathedral and castle tours was the truth: I have never felt more alone than I did in Lisbon. A human being can spend only so much time outside her comfort zone before she realizes she is still tethered to it.” When Crosley writes in the next essay about her temporal-spatial deficit, her willingness to be alone and lost in Lisbon takes on greater significance. The willingness to persevere and move forward into the unknown has meaning for travelers, for readers, and for anyone charting their own course in life. “I have never outgrown that feeling of constant disorientation,” she writes. “Rather, the feeling has followed me around like a homing device.” Yet in her essays Crosley is deft and sure-footed, charting a confident course and delivering satisfying layers of comedy and observation in every piece.


These are beautifully crafted essays that often happen to be outrageously funny, but can also be achingly sad. Crosley invites us to laugh at the curve balls life throws, but she allows the small tragedy of some moments to arrive naked in their sadness, refusing to cloak them immediately in the armor of comedy. Therein lies the winsome honesty of her writing, sacrificing neither a dark underside nor an inappropriate laugh to any particular cause.

Unlike a sitcom-writer or stand-up comedian, Crosely is not obligated to deliver a particular number of laughs per half hour or set. And this is in part what distinguishes the comedy of humorous non-fiction from that of other genres. Each essay, though peppered with funny one-liners, holds a larger humorous story whose unfolding cannot be rushed. The great test of comic narrative non-fiction is whether the writing can bring us along in the process. Sustained by the intelligence of the author’s voice, we would gladly go anywhere with Crosley, as we allow the landscape — unpredictable, heart-wrenching, and hilarious – she creates to unfold around us.