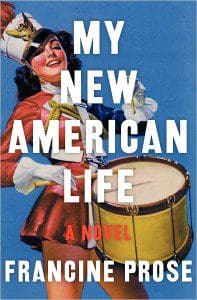 As My New American Life (HarperCollins, 306 pages) opens, twenty-six-year-old Lula stares out the window of the suburban New Jersey home where she works as a nanny, waiting without much hope for something, anything, to happen. If life was simple and humans were well-engineered for happiness, Lula might well be content. Yet she’s miserable. It’s not only because Lula is far from her home in Albania and without friends or anybody who shares her history that’s she’s unhappy. In Francine Prose’s new novel, it’s because Lula has begun to experience a uniquely American mode of discontent.

Lula has left her shattered family and come here on a tourist visa in the ages-old hope of building a better life in America. With her best friend, Dunia, by her side, Lula forges ahead in Manhattan, waiting and hoping for something to work out. Eventually Lula feels they must take some initiative to secure their immigration status, but Dunia suggests that if they do nothing, something good will happen. Unconvinced by this logic, independent Lula takes the initiative to answer a personal ad on Craigslist and lands a gig working for Mister Stanley, a well-intentioned middle-aged man who needs someone to look after his son, Zeke, now that his wife has suffered a nervous breakdown and left them to fend for themselves.

As Lula settles into the routine of making Zeke dinner and providing him with some basic companionship and guidance, Dunia disappears and Lula’s life takes on a frightful monotony. Into this lonely picture enters a ragtag band of Albanian gangsters, who show up unannounced on Mister Stanley’s doorstep and ask Lula to hide a gun for them. Lula assesses the situation, finds one of the gang attractive, and promptly invites trouble into Mister Stanley’s cold, sad home. As she later reflects, she “hadn’t meant to hurt anyone. She’d just been unable to resist the lure of risky entertainment.”


Prose hangs her finely tuned observations of character and culture on a plot that is neat, deft, and nearly (but not quite) plausible. Some turns are hard to take, but it barely matters. The evolution of Lula is what we are interested in, not the pseudo-evolution of Lula’s obviously hopeless infatuation that will never blossom into romance. The same goes for the fate of the two-dimensional Dunia, whose absence (in which Lula frets that her friend may have been abducted and sold into the sex trade) seems much more real and poignant than her eventual reappearance (to Lula’s relief and then, quickly, envious consternation) as the coddled wife of an equally two-dimensional plastic surgeon. Not even the bizarre but hardly pivotal mystery of who has been sneaking around in Mister Stanley’s home and leaving the strangest of tokens for Lula to find matters as much. All these strands, threaded lightly and deftly throughout to support the arc of the narrative, are comical and entertaining and breezy and smart. But they’re not what are most significant about the novel.

What matters here are Lula’s voice and appeal, which never waver. Even in her inconsistencies she is always utterly Lula. She is charming and direct, world-weary yet alarmingly naïve. Lula, more than a sweeping satire of America four years after 9/11, is the great subject of Prose’s book — and that is as it should be. Prose walks gracefully, once again, on the razor’s edge of satire, tempering insights which sting with empathy for the people who embody, but are not limited to, the stereotypes she scrutinizes. Prose turns an unflinching gaze on Lula, Mister Stanley, a cast of Albanian gangsters, a rebellious teen who lacks the nerve to actually rebel, and a heroic yet sleazy immigration attorney — recognizing in each of them elements of what ails society without completely reducing her characters to cliche or losing sight of the fact that, as Lula says late in the novel, “no one knew how to raise kids, they just screwed them up differently in different places.”

A compelling through-line is Lula’s pattern of lying, and the related development of Lula’s work as a writer. At the recommendation of her attorney and her sponsor, Lula begins to write: first fiction, which she tries to peddle as family history or at least authentic Albanian folklore; at other times she passes off authentic Albanian folklore as faux family history. Lula’s lies are occasionally self-serving, but more often they seem irrational, not strategic so much as a reflex of misdirection. All this comical duplicity prompts one of the novel’s most serious questions: What is the impact on personal relationships and private society when a political system makes mistrust, spying, informing on neighbors and other betrayals endemic? The answer is that personal relationships are deeply threatened, the fabric of society is frayed, and the more intimate a relationship should be the greater the fear and the greater the magnitude of potential betrayal.

Though Prose handles this serious theme with her usual light touch, it is nevertheless a fretful touchstone throughout My New American Life. Lula’s constantly slipping grasp on truth-telling brings to mind The Appointment by Nobel Prize-winner Herta Muller. In that work, Muller’s nameless narrator first runs into trouble when she is discovered slipping notes into the pockets of men’s suits at the clothing factory where she works. “Marry me,” reads one such note in a suit destined for America. And though that small act of mischief can hardly be interpreted as a plot, it brings her under relentless scrutiny. Muller’s book is no satire; it is a singularly serious work, and nearly unbearable in its gripping portrayal of life under the crushingly oppressive regime of Nicolae Ceausescu’s Romania. Muller infuses the text with the relentless, suffocating dread and the paranoia of life under the regime. Mistrust leaps off the page and actually infects the reader, so that even our attachment to the appealing heroine is poisoned by mistrust and doubts about the narrative. In such a regime, personal relationships simply cannot hold up; bonds disintegrate; truth and lies fade into each other in an anxious fog. If Muller’s nervy, bright narrator had been able to escape to the United States, she might have told a tale much like Lula’s.

Lula struggles anxiously with the evidently much softer troubles of her new American life, as indeed so many Americans do, including her new adopted American family of Zeke and Mister Stanley. Boredom. Loneliness and isolation. Lack of direction. And that most un-American trouble, an acute lack of hope — an aching sadness that the future is perhaps or probably not very bright after all. These may be luxurious problems to have, and far preferable to the immediate threat of violence and crushing deprivation of life in Albania. But they are chronic problems nonetheless, and no matter how lame they appear, they clamor for attention and threaten not only the ideals of American life (happiness, freedom, optimism), but also, as Prose makes clear, even the minimal well-being of emotional stability.

Mister Stanley’s wife’s freak-out serves as the most acute example of stability undone by these plaguing problems. Although Ginger’s breakdown is eventually revealed to be a psychotic break, Lula continues to regard her affliction as an understandable consequence of a comfortably middle-class, suburban life. Even after she finally meets Ginger, who is naked, filthy, and wielding a knife, Lula still regards her with sympathy, an indication of just how dire she thinks her own situation may be. Mental breakdown seems possible or even imminent: There are times when, indeed, Lula’s actions and reported thoughts strain credibility and prompt us to question either the text itself or Lula’s mental well-being.

In the end, Lula is forced to break out of her stable situation and leave Mister Stanley and Zeke. Though her pity and affection make that choice difficult, the sheer misery of her comfortable yet incomplete life propels her. Couldn’t Mister Stanley consider embarking on a new American life, Lula dares to suggest just before she leaves. Couldn’t he set himself free from the job he loathes, go back to teaching, perhaps unchain himself from the failed marriage and think, perhaps, of meeting someone new? Mister Stanley won’t, but we’re relieved when Lula realizes she must forge ahead. Her flight from being a kept woman in the secure isolation of her employer’s house to a search for a job and life of her own is, in its way, an utterly un-ironic assertion of American idealism, striving, and optimism.