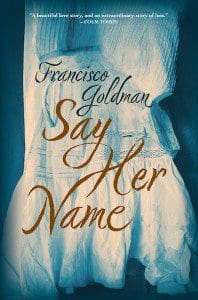 On a hot, bright July day in 2007, author Francisco Goldman waded into the Pacific surf off Mazunte, Mexico. His wife, Aura Estrada, watched him bodysurf, catching a wave and riding it twenty yards back toward the shore, and decided she’d like to do the same. As the next wave approached, she called out, “This one’s mine!” That powerful wave left Aura unconscious, floating in the shallow waters near the beach, and although she regained consciousness and fought for her life in the hours that followed, she did not survive.

Say Her Name (Grove; 350 pages) is Goldman’s wrenching but also warm and often funny novel about a middle-aged professor and writer named Francisco Goldman, who finds a passionate and enduring love with Aura Estrada, a talented young academic and promising fiction writer from Mexico. She dies just two years after they marry, catching her first wave bodysurfing off the coast of Mazunte, Mexico.

The book begins with the stark and true information of Aura’s accident. Part of the immense impact of Goldman’s work is how he renders this heavy foreknowledge: It becomes the spark that ignites the relentless engine of the narrative. As Aura comes alive on the page, the knowledge of her death becomes agonizing; our growing attachment to her creates tension and significance to that singular event around which the book restlessly orbits. Yet Say Her Name blossoms with the story of Aura’s life opening up — a young writer breaking out on her own, struggling to develop and define her work and to meet her own high expectations.

Unlike many books emerging directly out of bereavement, Say Her Name is not primarily about widowhood. It’s about love, and about Aura herself. And where many books about loss take a studied view of a codified, somewhat completed process of mourning, here the subject matter is still raw. Doubt and disbelief haunt the pages. Despite the terrible pain — which should be all the evidence he needs — Francisco-the-narrator has not entirely accepted that Aura is dead, and that the future they planned is now impossible. Aura’s death was so unexpected, and her presence so alive to him still, that more than a year following the accident Francisco staggers through a prolonged period of “diffuse daytime hallucinations, my eyes open and able to register who and what was around me, my ears hearing what anyone was saying, but somehow I was also dreaming at the same time, dream images spilling into the day like crude oil from a sunken tanker.”

Memory, always problematic, is especially so when parsing these ambiguous waking dreams. Goldman juggles fact and fiction, memory and hallucination, past and present and even an imagined, impossible future (where their much-anticipated first child has been born). The beautiful and skilled fluidity of Goldman’s writing cannot entirely mask the restless, agonized pacing that takes us from one scene to the next, skipping through time without dropping a stitch, yet clearly anxious, antsy. Our narrator searches and scans for fate, for his own culpability, but on finding any such traces he immediately grasps for redemption.


Finding certainty (the incontrovertible, daily lack of her that is the proof of her death), he grasps for doubt (a vivid dream life, waking dreams which bring her back to him). When doubt becomes unbearable, he seeks certainty (in facts, in research, in verification of parts of Aura’s history).

Yet the narrative never falters. Goldman spins all his threads continuously, almost breathlessly, as if weaving a spell that keeps Aura present, as though he’s afraid to pause for breath lest the spell be broken. It is the spell of storytelling itself; the magic of incantation that creates and keeps alive the beloved. “Say her name,” Francisco implores. “It will always be her name. Not even death can steal it. Same alive as dead, always. Aura Estrada.”

In the winter and spring following Aura’s death, the narrator finds comfort in the company of Aura’s closest female friends. Perhaps inevitably, that comfort-seeking takes a turn for the physical, first with one friend, then with another. How can Francisco explain himself? “We were all trying to find Aura in each other, I guess… It was deeply frightening for each of those young women to have lost a beloved friend in such a sudden and horrifying way. Everybody was unhinged. Of course they reached out for the embrace of someone who understood, who was also frightened.” That explanation lands with a thud. But loss of this magnitude can make us clumsy, desperate, foolish. Goldman is (understandably) compulsive about excusing himself immediately after finding fault. Then again, he is quick to note where he has been self-serving: “Does that sound self-exculpating,” he asks at one point. “Is this the kind of statement I should prohibit myself from making? … I need to stand nakedly before the facts; there’s no way to fool this jury that I am facing. It all matters, and it’s all evidence.” Overall, he’s unsparing toward himself, even questioning his very presence in Aura’s life. “Was I destined to have come into Aura’s life when I did,” Francisco asks, “or did I intrude where I didn’t belong and disrupt its predestined path?”

Despite delving with nearly crushing intensity into the impact of Goldman’s loss, Say Her Name usually dwells on these subjects only briefly, repeatedly resetting the focus on Aura — her life, her work, her potential, her family; her eccentricities, her joyful, playful nature; her sudden outburst of sadness; her worries and dreams. Goldman’s experience as an accomplished journalist is brought to bear on his novel, as he immerses himself in both researching and vividly imagining Aura’s past and her family. In his hunger to know all there is, in his desire to have more of her when she has vanished, Goldman breathes life into the sketches of young Aura, imagining her childhood with a lover’s tenderness, a fiction writer’s imagination, and a journalist’s eye for detail. Because this book draws on all these strands of Goldman’s talent, and because his love for Aura demands the finest work he is capable of in memorializing her life, Say Her Name shimmers with power.

This book lingers in the spell of love, drawing it out, savoring each note, each dissonance, its mystical strangeness. It revels in the depths of intimacy and marvels at the beloved’s inscrutability, her dual qualities of strangeness and familiarity. Francisco’s love for Aura is compellingly complex: affectionate, passionate, admiring, bemused. The narrator shares his love for Aura with such immediacy, such thoughtful reflection, that to read this book is to fall in love with Aura, and, ultimately, to mourn her loss alongside Goldman.

Balancing the laments of grief and love are the book’s vividly rendered portrait of the writing life, and thoughtful examination of currently competing notions about the role and function of literature. Goldman’s meditations on academia open an important discussion about what our intellectual culture cultivates and what it represses. Aura struggles with the theoretically driven strictures and fads of academia, wondering time and again if there is even a place for her, or for anyone who loves literature, in her graduate department. “Oh Aura,” sighs her thesis adviser, “We have to get rid of this naïve love you have for the literary text.”

At one point, Aura gives a presentation on Gayatri Spivak for a graduate class on critical theory, wherein she stresses Spivak’s notion that “literature, books, permit a kind of teaching that is unique and unverifiable.” Such unique and unverifiable teaching is at work in Say Her Name. It is a memoir categorized as a work of fiction. Should we demand that any text based on the author’s life offer the utility and veneer of complete factual accountability above all else? Or can we live with fiction’s ambiguities? Can we leave fiction the room to tell its own truths, truths beyond fact?  There is tremendous integrity in Goldman’s decision to frame his story as a novel. He thereby forthrightly acknowledges lapses of memory and the distorted perceptions of grief, leaving himself room to imagine Aura as a child, to relive (and, yes, perhaps reinvent) conversations and experiences, allowing them to come alive on the page and pay tribute to the underlying truth of Aura, of what she meant to the man who loved and married her; to the truth of their love, and of their time together.