I know we were notorious for our wicked cha-cha groove, but this is no funky cha-cha no more, I should warn everybody. Cha-chas, no matter how twisted, aren’t suited for this kind of darkness. This is a tango macabro. Carlos Gardel meets Poe in a dark and stinky alley. This is when the bolero gets drunk, the blues turn upside down, and the ballad collapses under the weight of its own pathos. This is a song too ghastly for words. That’s why I don’t have to worry about singing it (and secretly wish I didn’t have to write about it). This is a tune, at least in theory, ideally suited for Rosie in her Evita La Desaparecida mode, so she could blow her most noir trombone licks, although it would probably be Cuautemoc’s sax, as usual, leading, making sure “the lament is juicy, warm yet desolate, like Miles, man.”

Of all instruments, however, the bass with its grave, low voice is ideal to carry the burden of highlighting the crucial silences and breaks (let’s call them musical events) in this tango, which means that we are in Brendan’s hands. His chubby fingers have always moved fiercely up and down his contrabass with the overt intention to rule over the rest of us (his appetite for power only matched by his appetite for burritos). Fortunately for us, we had Ali, unafraid of dissonance or a power struggle, ever ready to harmonize anything that came his way with his light, sensible yet swingy piano style.

As for Jesús, our “guitar matador,” this would be his chance to go deeply flamenco and play “dark and tough como los cojones de un burro,” while Alberto would most likely leave the congas aside and opt for the cajón, “cause el cajón, mi hermano, is the king del silencio.”


So, yes, it is in principle an impossible tune, a forbidden dance (if there is such a thing), a censored-in-the-Mission-District story based on a series of improbable events that we have sworn to keep as secretive as we can — although writers are always selling somebody out, I tell myself, quoting Joan Didion, as if to remind myself that I might be a traitor but can’t really be blamed for that, or for being a hack, dangerous and ridiculous as a virtuous man in an imperfect and corrupt world. This is my chance to play the villain, I suppose, so all of us could play the victims of our own ethos, the blind leading the blind and guided only, at least in the beginning, by the unremarkable yet unforgiving rattle of a rusted Safeway cart rolling down the empty streets of a sleeping city lost in the fog.

For it all started with that metallic and repetitive sound in the middle of the night. It all started, actually, with Jesús feeling not quite responsible for his actions. He had been hit hard by the Spanish Blues, a seasonal affliction that rendered him cantankerously at odds with his surroundings: “Coño, tell me if there is anything more depressing than San Francisco after midnight. At least with the fog I don’t have to see that I live in a fucking cemetery de la hostia.”

He knew what he was talking about, since almost every night (and never before two in the morning), he had to face the streets of San Francisco as he walked home after closing Café La Michon.

“I mean, where are the fucking hipsters, the beats, the ex-hippies, the diehard punks de los cojones, the weirdos, the artists de la hostia, the so-called bohemians del coño de su madre, the dotcomers with their baby faces and all their fucking money? Where are the pimps, the whores, those classical creatures of the night? Where is the music and all the fucking hip and multi-culti San Francisco youth? Why aren’t they flooding the streets of this supposedly world-class city, me cago en Dios? Why isn’t everybody enjoying the night como gente civilizada, hostias? Where is life, por los cojones de mi abuela?”

Needless to say, once Jesús felt this “deeply flamenco,” there was no turning back. He had to go to Manolo’s studio on Virgin Alley and share a joint with him as he listened to Manolo’s unpolluted Madrilenian accent despite almost a lifetime in San Francisco. And since I can never go to bed before sunrise anyway, and that night I certainly didn’t feel like going home to write, I decided to walk with him. On foggy nights like this one, in any case, it wasn’t that unusual for us to keep each other company on our way home from La Michon. We lived two blocks away. So there we were, walking down Valencia Street practically blind and Jesús, next to me, going on and on about what “an insipid city de los cojones San Francisco is,” when we first heard that monotonous rattle hammering against the night’s slippery frog-like skin.

Then, upon crossing “the border” and remembering how much Alberto liked to call Mission Street “Tijuana” and Valencia Street “San Diego,” and not before Jesus added that “the distance between the two can’t be measured in blocks, coño,” we noticed the rattle got awfully close to us, close enough, in fact, to give us a first glance of the floating wake of her white dress as she pushed the cart away with a desperate sense of purpose, like a homeless bride late for her midnight wedding.

That was it, really. Or maybe I should say that was all it should have been. But then came a wet, cold, sticky urge to follow her as one pursues a ghost, an urban legend, a myth that had already left its fragile yet immortal mark on the most inhospitable alleys and hours of the Mission. It was about time, we told each other, as we ran into La Llorona, The Boogie Man’s Bride, Frida La Loca (condemned to push her cart full of brushes and paint cans in penance for our sins).

It could be argued, of course, that maybe all we wanted was to watch her paint something on a wall or a garage door; all we cared about was to witness the almost miraculous fact that madness had somehow not been able to take everything away from her, especially what she loved most; all we needed was to have a chance to mourn and come to terms with the death of the Amanda we knew and our death inside her impermeable world. And considering that in a city big on murals, Amanda Vargas was (is) one of its biggest stars (“The Joan Baez of the Bay Area muralists,” the local press called her), it could never be overstated what a monumental tragedy her nervous breakdown had been (“An artist in a constant state of revolution,” as she preferred to call herself). So given the fact that it was (and it is) simply impossible to walk the streets of the Mission without running into her murals, I guess it was only to be expected that after that night, we would began to take late-night walks “chasing Frida.” 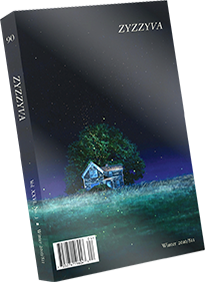 “Frida & Diego, or Among Musicians Only” by was published in ZYZZYVA No. 90. Purchase the back issue in our shop.