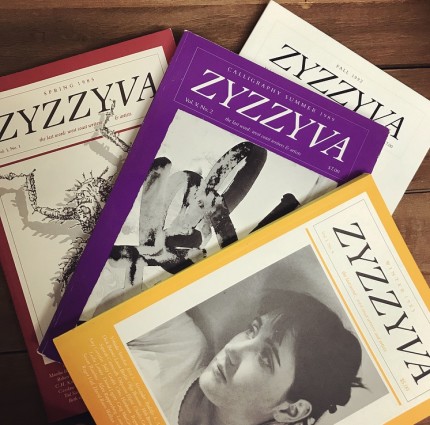 Lucia Berlin was an American short story writer, who developed a small, devoted following, but did not reach a mass audience during her lifetime. She rose to sudden literary fame eleven years after her death, in August 2015, with FSG’s publication of a volume of selected stories, A Manual for Cleaning Women. ZYZZYVA published a number of Berlin’s stories during the Eighties and Nineties, and her work can be found in Issues 1, 4, 18, and 31. Below is her story “Carpe Diem” in its entirety from ZYZZYVA Issue 1.

Most of the time I feel all right about getting old. Some things give me a pang, like skaters. How free they seem, long legs gliding, hair streaming back. Other things throw me into a panic, like BART doors. A long wait before the doors open, after the train comes to a stop. Not very long, but it’s too long. There’s no time.

And laundromats, but they were a problem even when I was young. Just too long, even the Speed Queens. Your entire life has time to flash before your eyes and you just sit there, a drowner. Of course if I had a car I could go to the hardware store or the post office and then come back and put things into the dryer.

The laundries with no attendants are even worse. Then it seems I’m always the only person there at all. But all the washers and dryers are going-everybody’s out at the hardware store.

So many laundromat attendants I have known, the hovering Charons, making change or that haven’t got any change. Now it’s fat Ophelia who pronounces No Sweat “No Thwet.” Her top plate broke on beef jerky. Her breasts are so huge she has to turn sideways and then kitty-corner to get through doors, like moving a kitchen table. When she comes down the aisle with a mop, every- body moves, and moves the baskets too. She’s a channel-hopper. Just when we’ve settled in to watch the Newly-Wed game, she’ll flick it to Ryan’s Hope.

Once, to be polite, I told her I got hot flashes too, so that’s what she associates me with- The Change. “How’s it goin with The Change?” she says, loud, instead of hello. Which makes it worse, sitting there, reflecting, aging. My sons have all grown now, so I’m down from five washers to one, but one washer takes just as long.

I moved last week, maybe for the 200th time. I took in all my sheets and curtains and towels, my cart piled high. The laundromat was very crowded; there weren’t any washers together. I put all my things into three machines, went to get change from Ophelia. I came back, put the money in, the soap in and started them up. Only I had started up three wrong washers. Three that had just finished this man’s clothes.

I was backed into the machines. Ophelia and the man loomed before me. I’m a tall woman, wear Big Mama panty-hose now, but they were both huge people. Ophelia had a pre-wash spray bottle in one hand. The man wore cut-offs, his massive thighs were matted with red hair. His thick beard wasn’t like hair at all but a red padded bumper. He wore a baseball hat with a gorilla on it. The hat wasn’t too small but his hair was.so bushy it shoved the hat high up on his head making him about seven feet tall. He was slapping a heavy fist into his other red palm. “God damn. I’ll be Goddamned!” Ophelia wasn’t really menacing; she was protecting me, ready to come between him and me, or him and the machines. She’s always saying there’s nothing at the laundry she can’t handle.

“Mister, you may’s well sit down and relax. No way to stop them machines once they’ve started. Watch a little TV, have a Pepsi.”

I put quarters in the right machines and started them. Then r remembered that I was broke, no more soap and those quarters had been for the dryer. I began to cry.

“What the fuck is SHE crying about? What you think this does to my Saturday, you dumb slob? Jesus Wept.”

I offered to put his clothes into the dryer for him, in case he wanted to go somewhere.


“I wouldn’t let you near my clothes. Like stay away from my fuckin clothes, you dig?” There was no other place for him to sit except next to me. I wished he would go outside, but he just sat there, next to me. We looked at the machines. His big right leg vibrated like a spinning washer. Six little red lights glowed at us.

“You always fuck things up?” he asked.

“What were you in a hurry for?” I meant it nicely, but he thought I was being sarcastic.

“You stupid broad. If you were a dude I’d wash you. Put your empty head in the dryer and turn it to cook.”

“Damn right you’re sorry. You’re one sorry excuse for a chick. I had you spotted for a loser before you did that to my clothes. I don’t believe it. She’s crying again. Jesus wept.”

Ophelia stood above him.

“Don’t you be botherin her, hear? I happen to know she’s going through a hard time.”

How did she know that? I was amazed … she knows everything, this giant black Sybil, this Sphinx. Oh, she means the Change.

“I’ll fold your clothes if you like,” I said to him.

“Hush, girl,” Ophelia said. “Point is, what’s the big deal? So what? In a hunnert years from now just who’s gonna care?”

“A hunnert years,” he whispered. “A hunnert years.” And I was thinking that too. A hundred years. Our machines were shimmying away, and all the little red spin-lights were on.

“At least yours are clean. I used up all my soap.”

”I’ll buy you some soap for crissake.”

“She didn’t ruin my day, she’s ruined my whole fuckin week. No soap.”

Ophelia came back, stooped down to whisper to me.

“I’ve been spottin some. Doctor says it don’t quit I’ll need a D and C. You been spottin?”

I shook my head.

“You will. Women’s troubles just go on and on. A whole lifetime of trouble. I’m bloated. You bloated?”

The clothes were in the final spin. I’d have to hang mine up to dry on the fence; when I got paid I’d come back with soap.

I let the man put his clothes in a basket and go to the dryers before I took mine out. Some people were grinning but I ignored them. If I had paid any attention to the other people there, I might have abandoned my things and left. I filled my cart with soggy sheets and towels. It was almost too heavy to push and, wet, not everything fit. I slung the hot-pink curtains over my shoulder. Across the room the man started to say something, then looked away.

It took a long time to get home, even longer to hang everything, although I did find a rope. Fog was rolling in.

I poured some coffee and sat on the back steps. I was happy. I felt calm, unhurried. Next time I’m on BART, I won’t even think about getting off until the train stops. When it docs, I’ll hop up and rush down the aisle, will get out just in time.

Read more of Lucia Berlin’s work in ZYZZYVA by purchasing a Selected Back Issue and choosing Issues 1, 4, 18, or 31.

One thought on “‘Carpe Diem’ by Lucia Berlin, ZYZZYVA No. 1, Spring Issue”