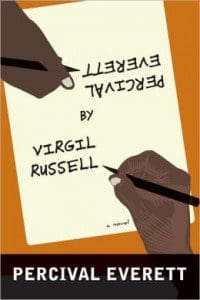 Percival Everett By Virgil Russell by Percival Everett proves to be exactly what the title advertises; a novel that teases the reader with the identity of the narrator until the last page and even then, we are left wondering. The book opens with a conversation in a nursing home between a dying father and his son, presumably based on Percival Everett and his own father, a final attempt to connect and salvage a relationship weakened by time spent apart. The character of the father begins by telling his son he is going to read his writing aloud. “And I’ve written something for you. He looked at my face. Not to you, but for you. It’s sort of something you would write, if you wrote. Here it is:” And with that, we’ve become audience to intertwining plotlines, a dream-like collection of characterizations, and a rumination of what it is to be human.

In the first few pages we meet Gregory Lang, a painter whose marriage is on thin ice. A young woman, Meg Caro, shows up at his door, stating she would like nothing more than to be his intern. Yet as the book continues, we learn Meg Caro wants a father in Lang. Next, we encounter Murphy, a recently single man who becomes the doctor to an overweight neighbor in exchange for his camera. They are soon joined by the likes of Charlton Heston and Nat Turner, and as these stories and characters weave in and out of one another, more is revealed about the father and son relationship that was introduced in the beginning. Teufelsdrockh, the nursing home where the father and son are relaying stories, remains in the background and the book concludes with an extravagant last-stand against the “Gang of Six,” a group of dictatorial orderlies that abuse the father and his companions. The father steals the master key ring to the nursing home and wreaks havoc as best he can in his old age, mounting a last stand against death itself. Yet, familiar details and references from Lang’s story, Murphy’s story, and the father and son’s dynamic show us this entire narrative is a cohesive work.


It doesn’t matter we are never certain of the identity of the narrator, of the father, or of the son because they are one; they are all of each other, just as the stories told by the father blend into a singular story. “I’m an old man or his son writing an old man writing his son writing an old man. But none of this matters and it wouldn’t matter if it did matter.” The father and son become one through the stories; Percival Everett fuses with his father and the connection between the two, the relationship that Meg Caro wanted with Gregory Lang, is achieved.

With his new novel, Everett gives us a work of fiction that grapples with grief, the fragility of human life, death, relationships, loneliness, and yearning for purpose. In a work that could almost be categorized as a lyric essay, Everett manages to keep the reader’s interest, despite the twist and turns of this complex narrative. We are left breathless, with heartache and with the understanding we are all made of stories, nothing but products of our diverging and converging plot lines that eventually will come to an inexorable point.