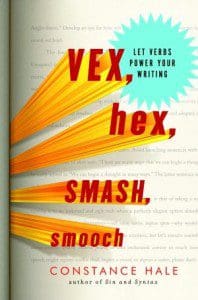 Constance Hale (author of Sin and Syntax: How to Craft Wickedly Effective Prose) has penned another guide to prose writing. Her new book, Vex, Hex, Smash, Smooch (Norton; 400 pages), is a celebration of the verb. “(A)ll serious writers know,” Hale writes, “that verbs act as the pivot point of every sentence. Verbs put action in scenes, show eccentricity in characters, and convey drama in plots. They give poetry its urgency. They make quotes memorable and ads convincing.” In her book, Hale gives readers and writers many views on the life of verbs, from their birth to their evolution to their function. Hers is not only a book on the whats of grammar but a book on its hows and its whys.

Hale demonstrates the thoroughness of her study by opening with a brief history on words. In the first chapter, she delves into the initial forms of communication among pre-homo sapiens and into the earliest vocal utterings of our distant ancestors. As well as being informative, this introduction is an encouraging reminder that even our everyday use of words finds a place in the ongoing drama of language.


From there, Vex, Hex, Smash, Smooch moves to its “grammar guide” section, which fills most of the book. The method in which Hale presents the rules of language, however, is what makes the book stand out among other guides. Instead of blandly listing rules, Hale uses examples, writing prompts, explanations, and displaying a whole lot of wit to sympathize with readers and to enable them to write with confidence.

Each chapter in the book is divided into four sections—“Vex,” “Hex,” “Smash,” “Smooch.” In the “Vex” section, Hale tackles “things that are oh so confusing about language, syntax, and verbs…. By dip[ing] into linguistics, history, or geeky grammar, decoding it to help you understand our language in a way you didn’t before.” Here, for instance, she explains the types of verbals (infinitives, gerunds, and participles) and unpacks the idea of phrasal verbs (such as build up, come to, and make out).

In “Hex,” Hale puts “a pox on false language pronouncements we’ve heard over and over” and sets the writer free by tearing down language “rules” that have become more restrictive than helpful. She teaches us to ignore grammar cops’s proclamations and shows us we can in fact end sentences with prepositions, use the passive construction, and even split our infinitives. The strength of Hex, Vex, Smash, Smooch is that it gets to the reasons behind the rules, making its readers think carefully about their writing decisions.

The “Smash” and “Smooch” sections are a series of case studies, which demonstrate effective and not-so-effective prose. In “Smash,” Hale looks at “the goofs of writers famous and infamous, hapless and clueless” and helps us analyze habits we should stay away from. And in “Smooch,” where we find “writing that is so good you’ll want to kiss its creator,” Hale brings the language guidelines to life, showcasing the types of stellar writing that can emerge from a mastery of verbs.

Ultimately, Hale’s book is not so much about verbs as it is about the overall craft of writing. (She ends with a few chapters on style and a handful of helpful appendices.).A versatile resource on writing powerful prose, Vex, Hex, Smash, Smooch can be read from cover to cover or one random chapter at a time, and will certainly prove itself a helpful tool on the shelf of any writer.

One thought on “Everything Pivots on the Verb: Constance Hale’s ‘Vex, Hex, Smash, Smooch’”