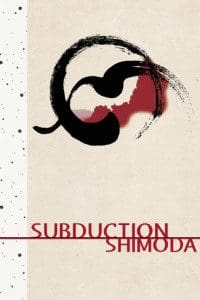 In Todd Shimoda’s most recent novel, Subduction (Chin Music Press; 304 pages), the book’s visual design is as crucial to the narrative’s enjoyment as is the prose

Endo, a doctor exiled to the island of Marui-jima for committing a fatal mistake, occupies himself by becoming concerned with the island’s elderly residents. Curious about the years before his arrival, and the choices the islanders have often come to regret, he befriends Mari, the island’s documentary filmmaker, and grills her about the islanders’ stories, as well as her own. But when she presses Endo to share personal details of his own life, he only stresses his utter dullness and deflects the question back to her. For a man so obsessed with the past, it is clear Endo is a man unwilling to reciprocate.


Aki, a seismologist specializing in earthquake prediction, is similarly obsessed with the island’s seismic activity. The residents, whose stubbornness kept them on Marui-jima despite repeated calls for evacuation, have become accustomed to the frequent earthquakes, some even insisting they know when one is about to hit. It makes sense, really. Only Marui-jima’s elderly inhabitants understand the inner workings of the island—the way it functions on secrets, each more traumatic and shameful than the one prior. As the past is slowly revealed, the stories serve to enlighten Endo on the underlying tension among Marui-jima’s inhabitants. Frequent earthquakes haunt the living the same way the past does, and the past keeps reappearing “continuing to affect the island, like aftershocks.”

While Subduction is a mystery story, it expects patience from the reader. Not every chapter ends on a note of suspense, and clues are not necessarily revealed or uncovered in a spectacle of drama. Shimoda is a calculating storyteller, and while  an eeriness spans the entire novel, it’s possible the reader may not feel the thrill of the mystery until much later into the story.

Though if beauty on the edge of something dark and illicit excites you, the author and the artist L.J.C. Shimoda, whose brush paintings are scattered through the book’s glossy pages, have you covered. There is a richness in the writing that couples seamlessly with the story’s visual presentation, invoking nature and the mythical, as when Endo says he can “feel the island pulsing, and breathing, crying a low moan as if it were dying.” When the island’s residents retell stories of the past, the text is printed in gray, a visual interpretation of memory—in some ways fading into the pages, but also ghostly present.

Also included in the book is “Kashima and the Giant Catfish,” a story from Japanese mythology about a catfish who lives in the mud under the islands of Japan, and Kashima, the god who restrains it with a stone. As the catfish attempts to free itself, it thrashes about under the Earth, causing violent quakes. This short interlude is also accompanied by exquisite art on each page.

2 thoughts on “An Island Shaken By Memories: ‘Subduction’ by Todd Shimoda”