A Theory of Small Earthquakes (Soft Skull Press; 352 pages) is the first novel by award-winning author Meredith Maran. Known for her several nonfiction books, including My Lie: A True Story of False Memory (2010), Dirty: A Search for Answers Inside America’s Teenage Drug Epidemic (2003) and Class Dismissed: A Year in the Life of an American High School, a Glimpse Into the Heart of a Nation (2000), Maran worked on her story of love, friendship and family for eight years (“from start to publication”).

Humorous and heartfelt, and breezy yet serious, her story of the long and evolving relationship between two young women – bisexual Alison Rose and gay Zoe — serves as the book’s anchor, to which Maran tethers such themes as the politics of the lesbian community, the long road to becoming a working writer or artist, and the trials of trying to get pregnant, among other things. Told through Alison’s eyes, A Theory of Small Earthquakes is also an honest account of a young woman heeding her instincts about who she is and what she wants out of life. Doing so takes Alison and the reader to unexpected places, making Maran’s protagonist appealingly complex. Sometimes she acts like a heel; sometimes she’s noble. But she is, like all of us, trying to figure things out as best she can.

The novel deftly evokes, too, a particular time and place: the Bay Area from the ‘80s through 2005, with the focus on the East Bay and a community of progressive people – some of whom we now would call “creatives” – unafraid to redefine what’s possible: namely, a society that allows for same sex parents and expands upon the concept of what a loving family looks like.

We talked over email with Maran, who lives in North Oakland with her wife, about her new book.

ZYZZYVA: When we meet Alison and Zoe, they’re both undergraduates, and that allows you to have some fun depicting political correctness on college campuses in the early ‘80s. But you do so with some tenderness. Can you tell me what you found insufferable about that mind set as well as what you found reaffirming?

Meredith Maran: Oh, the hours of our lives we’ll never get back, sitting in all those meetings and doing all that “criticism/self-criticism” and examining each other’s cervices and voting on which sexual orientation to adopt. Recently, while shopping at Berkeley Bowl, I ran into one of my Berkeley Women’s Health Collective “sisters” who went lesbian in the 1980s. As she introduced me to her husband, it gave me a little frisson to realize there are at least 20 women in Berkeley, including me, who are undoubtedly better acquainted with her cervix than he is.

But you’re right; I have affectionate memories of those times. Smashing monogamy and growing out my armpit hair was, um, liberating while it lasted. And I don’t find the self-righteousness of that era any more insufferable than the passion and dogmatism of any other. One possible exception is the Occupy movement, which I adore for its insistence on refusing authority, which goes beyond questioning it.

Z: Sexuality in your novel is a fluid concept: It has to do with Alison heeding her physical desire, and in this sense being true to herself, despite how upsetting this may be for others. Why do you think this sort of malleability is so threatening to some?


MM: Indulge me my slightly roundabout answer. Which is, in fact, a question.

About year before I “went gay,” I took my young sons to Gay Pride (undoubtedly to prepare them, and myself, for the team-switching to come). Being an unrepentant commie, I’d taught them about the economic bases of racism and sexism and worker oppression and war. So we were standing on the corner of Market and Castro, surrounded by drag queens and bears and leathermen with picket signs, and my five-year-old said, “I know rich people make money off bad attitudes about women and black people and workers. But Mommy—how do rich people make money off bad attitudes about gay people?” My Marxism failed me. I had no idea what to say.

Fast-forward five years, to 1992. Sons and girlfriend and I are watching a Clinton/Gore rally. I get my first good look at Gore, and I blurt, “He’s kinda hot.” (If you’re questioning my judgment as a mother and an assessor of hotness, you’re not alone.) Younger son, then 12, scowls. “Mom,” he says, “it’s so annoying that you’re bi.”

If anyone knows why fluid sexuality is so annoying to large sections of the human race, please explain. I’ll pass your answer on to my grandkids.

Z: Your novel isn’t just about sexuality being fluid, though. It’s also about how we can love people in deep but different ways over time. Can you talk a little bit more about that and how this plays out in your book?

MM: In what was once referred to as “the dyke community,” being best friends with your ex-lover was practically a membership requirement. It never happened to me—undoubtedly because 33 years in the heterosexual community trained me to shed my exes, not go on vacations and spend Thanksgivings with them.

But it always amazed me, watching my lesbian friends’ relationships morph from friendship to romance to dyke drama to connections that defied labels. When the lesbian baby boom came along, parenthood and family made those constellations even more expansive and complicated. I loaned that tortured intimacy to Alison and Zoe as an homage to those brave, wacky pioneers who struck out to explore the outer relationship frontiers. 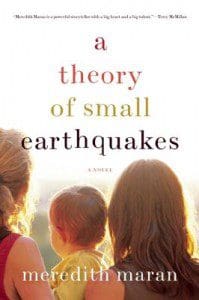 Z: The particular world you depict in the novel – of well-educated, progressive, creative types living in Oakland and Berkeley, who’ve formed unconventional but loving families – does that world still thrive today, or are you in some ways writing an elegy for a distinctive way of life that’s perhaps on the wane because of, say, a rotten economy and high cost of living?

MM: Elegy! That’s the word I was looking for.

Actually, the rotten economy seems to be leading to return to that way of life, only in reverse. Instead of smashing the nuclear family, financial constraints are forcing multiple generations of families to live together.

That said, the commune lives, at least in my North Oakland ‘hood. When I moved here in 1989, there was a “group house” across the street. Twenty-three years later, it’s still a group house. But as the economy has tanked, its ever-shifting residents have become older and older.

Z: Tell me more about your novel’s title. How does it relate to the story of Zoe, Alison, and Mark, the man with whom Alison makes a life?

MM: Don’t you hate it when writers say, “It just came to me?” Sorry, but the title just came to me. After several dozen other titles had come and gone. (The book took eight years from start to publication, so there was no big hurry.)

The phrase stuck with me, so I deconstructed it (as Alison’s Wimmin’s Studies teacher would say) and saw some obvious links: the story is set in the Bay Area, and the turning point of the novel comes as a result of the ’89 Loma Prieta quake, and Alison has built her family on a fault line of secrets and lies.

What amuses me most about the title is that it’s based on the actual theory—both scientific and urban-mythological—that small earthquakes release pressure on fissures, thereby diminishing the odds of a big one. During the years I’ve been writing the novel, that theory has been discredited, resurrected, and discredited again, but those of us who live here continue to cling to it, whether it’s true or not. Which is pretty much how Alison lives her life: believing what she wishes were true, and trying to convince everyone around her to do the same.

Z: How much of your personal life informs the novel? I’m thinking the insight into the life of a freelancer, to take one example, is informed from your own experience as a longtime journalist. But I’m guessing your own family’s formation is reflected in the novel, too?

MM: Last first: yes, my family is “nontraditional,” which, I’ve learned, is marketing-speak for “gay parented.” It’s also, sadly, all too conventional, in that I’m divorced from my kids’ father, never a good thing for a child.

And yes, I had a great time avenging the ridiculousness of the freelance writing life by making Alison an underpaid, underappreciated journalist, subject to the whims of the marketplace. (What other kind of journalist is there?) Writing queries for her also proved quite useful: I actually ended up pitching a few of Alison’s story ideas to my magazine editors.

Honestly, the aspect of my personal life that was most gratifying to write was the paean to my beloved North Oakland neighborhood, where I’ve lived for the past 28 years—and where Alison and Mark, oddly enough, bought a house much like my own. As my elderly black neighbors die or move to nursing homes, the neighborhood is changing, and despite diversity correctitudes, America is increasingly segregated, and I fear there won’t be a truly mixed neighborhood like this one used to be ever again, anywhere.

Z: A Theory of Small Earthquakes is imminently entertaining. I would even call it a “beach read.” Do you think there’s a need to tell these sorts of stories in a straight-ahead, approachable way?

MM: A beach read! Thanks for the ultimate accolade, Oscar. And thanks to Soft Skull Press for taking a chance on a book that, ironically, is pretty straight (meaning commercial) (we hope) relative to the rest of their list.

I had no deliberate intention to make the novel, dare I say, accessible. I did what I think every author does: I wrote the kind of book I like to read. That’s just who I am.