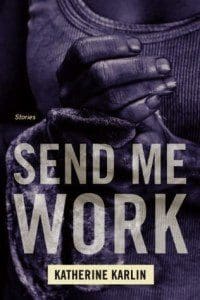 The heroines of Katherine Karlin’s first collection of short stories, Send Me Work (TriQuarterly Books/Northwestern; 159 pages), are on the verge of realizations about their unforgiving communities; that is, they are discovering the forces driving the blue-collar world around them, and, more interestingly, uncovering complex emotional truths about themselves. This is often quite funny. In “Bye-Bye, Larry,” (a Pushcart Prize winner originally published in Zyzzyva’s Spring 2005 issue), the female protagonist, a queer, soon-to-be-laid-off oil worker, muses on the differences between herself and the plant’s female manager: “it occurs to me that if I were taller, smarter, had paid more attention in school, I might have been a power lesbian too.” At other times, the moments are disappointing lessons in the hardships of everyday life.

Throughout these eleven stories, the locations and circumstances change — from print shops to rail yards to oil refineries and more — but the various working worlds are all deftly rendered. In “The Severac Sound,” two talented, young musicians visit the deathbed of their mentor, and a hard-working female oboist has to accept she is not as gifted as her slovenly male competition. In “Muscle Memory,” a coming-of-age story set in post-Katrina New Orleans, Destiny, an aspiring welder, realizes that “taking responsibility was easy… the hard part was all the ruination that lay outside of your responsibility.” The stories are littered with important, small details, like the type of cane used for making a superior oboe reed or the specific vocabulary of an oil worker.


Karlin displays a talent for humor and dialogue throughout, and, at her best, creates beautiful images that fit seamlessly into the narrative. “Bye-Bye, Larry” begins in this way, with a description of the death of Larry Michalik, who “merely lowered his union coffee mug one morning, dropped his head, and went out like a flame.” But there are times when Karlin’s stories lag or her images distract the reader from the story, such as in “Into the Blue Again.” When the forty-member Roberto Clemente Brigade convenes in the Miami airport on the way to revolution-era Nicaragua, Karlin describes the activists from Chicago, Brooklyn, and other cold cites as being like Lean Cuisine “taken out of the freezer and slammed in the oven.”

But even in that story, her dialogue shines. She convincingly creates conversation on the page, nailing her characters’ unpolished, gritty, even politically incorrect language. (From “Bye-Bye, Larry”: “Margo Allshouse had yawned and said, ‘if you had two dicks I could still out fuck you, Chessie’.”) She has an ironic wit that pulls the reader through, even when the narrative doesn’t have a strong torque or where her political message seems too overt. And Karlin is political. The stories here address important issues and events (9/11, the foreclosure crisis) in contemporary American life. Sometimes they’re handled nimbly and hilariously, and other times they seem clunky and overbearing.

We get both in “Stand Up, Scout,” in which Karlin recounts the influence of the firebrand mother of Penelope, the shrewd, fast-talking head of a lower Manhattan print shop. There are moments of well-deployed irony. Penelope begins her bat mitzvah by recounting the gruesome events of the Dier Yassan massacre and asks her orthodox family to consider what it means to be a “good Jew.” But the political refrain of the story, “speak truth to power,” is over the top and dulls the references to Harper Lee’s To Kill a Mockingbird.

That said, most of the time Karlin is subtle with her messages to where the reader might miss it, or, more to what seems to be Karlin’s intention, can choose not to notice. The emotional story of the characters comes first. At the core, the stories in Send Me Work are about discovery, and there is a lot of truth and wisdom in Karlin’s well-formed prose. There are times where the reader will nod in agreement. And like Penelope’s mother, who guides her daughter to notice misogyny “everywhere … even on The Cosby Show,” there might be moments when Karlin may even help the reader see the world a little differently.