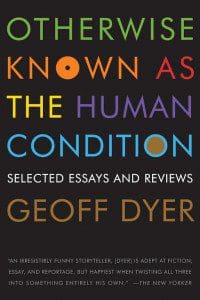 Geoff Dyer, the British novelist, critic and essayist, sums up his new collection of essays and reviews from the past 25 years, “Otherwise Known as the Human Condition” (Graywolf; 432 pages) as “a glimpse of a not-unrepresentative way of being a late-twentieth-early-twenty-first-century man of letters” — one who writes on assignment, covering a vast range of subjects, in addition to creating fiction. “It’s a job for life; more accurately, it is a life,” he writes in the introduction, “and hardly a day goes by without my marveling that it is somehow feasible to lead it.”

Dyer’s gigs include magazine essays, book reviews, and introductions to photographic collections and new editions of works by canonical authors. He swings from trenchant critiques (Ian McEwan’s “Atonement”) to you-are-there journalistic adventures (“The Wrong Stuff”) to astute art and music criticism (“Turner and Memory,” “Is Jazz Dead?”) to personal essays (“Sacked”), seeing his subjects with a piercing eye, punctuating his ideas with telling metaphors and imparting mind-blowing insights in every piece, and seemingly on every page.

It’s easy to be impressed by a critic’s clever turn of phrase; that’s his job. But Dyer’s perceptions are so fresh they introduce a new way of thinking about a work, its creator or the entire medium. When discussing Berkeley fine art photographer Richard Misrach’s “Desert Cantos” series, he writes, “The best photographs are to be listened to as well as looked at. Misrach is the great photographer of silence.” In talking about a kooky Jacques Henri Lartigue photo of a woman in a funny hat reading a book, he zeroes in on the details in the composition and comments, “That’s the thing about great photos. Everything in them is essential—even the inessential bits.”


What is most infectious is the excitement he conveys at discovery. Describing his first encounter, in 1999, with Michael Ackerman’s photographs, he writes, “The pictures were subtly erotic, incredibly intimate, and, as can happen when you are exposed to certain works of art, I felt as if something in me had been waiting for them. It was like falling in love.” Not that he is always in awe of his subjects. He calls voyeuristic Czech photographer Miroslav Tichy “a few frames short of a roll,” while acknowledging “his pictures, at their best, have the delicacy and poise of a smutty Vermeer.”

It’s a delight to get to know Dyer as much through his criticism as through his revealing personal essays. In his explication of D.H. Lawrence’s “Sons and Lovers,” he confesses, “If I had to select a single book to represent what literature meant to me — what difference literature has made to me — that book would be Sons and Lovers.” Dyer, like the protagonist and Lawrence himself, was born to working-class parents, and Lawrence (whom Dyer wrote a book about, “Out of Sheer Rage”) was his great role model for transcending that class, “and because his example (leaving England, traveling constantly, living by his pen) made writing a means of — and synonym for — being fully alive: an adventure, in short.”

In his discussion of F. Scott Fitzgerald’s “Tender Is the Night,” he quotes a drunken dinner table scene and observes that it is a better description of what it’s like to come on to the drug Ecstasy than anything in contemporary literature. We learn more about Dyer’s drug dalliances in the personal essay section, especially in “Sacked,” where he looks into his 1982 diary and finds a log of his intake, from LSD and mushrooms to a couple of tastes of heroin.

Literature is the lens through which Dyer sees the world. He quotes Milan Kundera to help us understand Richard Avedon; Don DeLillo to illuminate his piece about sex in hotels. And he makes us see what he sees. As he says of McEwan, “when he writes ‘glass of beer,’ we do not just see it; we are willing to drink from it vicariously.”

Regan McMahon is a writer and book critic in Oakland.