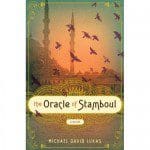 In The Oracle of Stamboul (Harpers; 304 pages), a flock of hoopoes (the Eurasian bird known for its colorful, showy Mohawk) watches over Elenora, the story’s heroine. The birds, which coat “the town like frosting” upon Elenora’s birth, are the initial hint that something supernatural – perhaps even prophetic – is afoot in Michael David Lukas’s ultimately winning first novel.

Lukas, a Bay Area writer and former Fulbright Scholar in Turkey, opens his book in dramatic fashion: Amid the Russian invasion of a small Ottoman settlement in 1877, Elenora is delivered by a pair of midwives. The women show up unannounced at the doorstep of the house, stating only that they followed the stars and a former king’s premonition to arrive there. Despite their help, the girl’s mother dies after childbirth, and Elenora is left to her adoring father, who quickly marries his sister-in-law, Ruxandra, just to provide her a mother.


Ruxandra is, in that classic stepmother-ly way, strict, resentful, and resolute in her belief that a girl should know just enough of the world so she can haggle for goods at the bazaar and perform requisite household chores — anything more would be an affront to a lady’s station.  Yet it is quickly apparent Elenora is smarter than the merchants at the bazaar, smarter than Ruxandra, even smarter than her father.  At an early age she devours books in her dad’s library. She learns new languages with uncanny speed and deciphers lengthy codes with unparalleled ease.  She is, it becomes clear, a savant.

To flee her stepmother’s crushing provinciality, Elenora hides in the hull of a ship carrying her father on business to Stamboul, the Ottoman capital. She emerges, rank and disheveled, and stays with him for the rest of his journey. To reveal more of the plot would be to give away too much, but suffice it to say tragic events unfold that force Elenora to remain in Stamboul for longer than expected. Soon, her unusual gifts impress her father’s business partner and eventually the sultan himself.

From its outset, The Oracle of Stamboul conjures the magical realism of a fairy tale.  In fact, especially in the book’s earliest chapters, the story is almost overshadowed by its similarities to the ingredients found in a Disney narrative — poor, misunderstood child; deceased parent; uncompromising stepmother; unnatural affinity between humans and animals. But that concern gives way to the force of the lush and exotic world Lukas has created.

The writing is elegant and precise, and the words maintain a regal air that becomes especially appropriate during later scenes in which Elenora interviews with the sultan.  It is no small feat that even under this majestic gloss, the story remains vibrant.  The novel also withstands having some woefully underdeveloped characters (at times, one knows little of the main protagonists’ motives, such as when, with little explanation, Elenora swears off speaking). But what the novel lacks in places, Lukas makes up for with his talent for simple, graceful prose. It’s a talent that marks the arrival of a unique, skilled young writer.