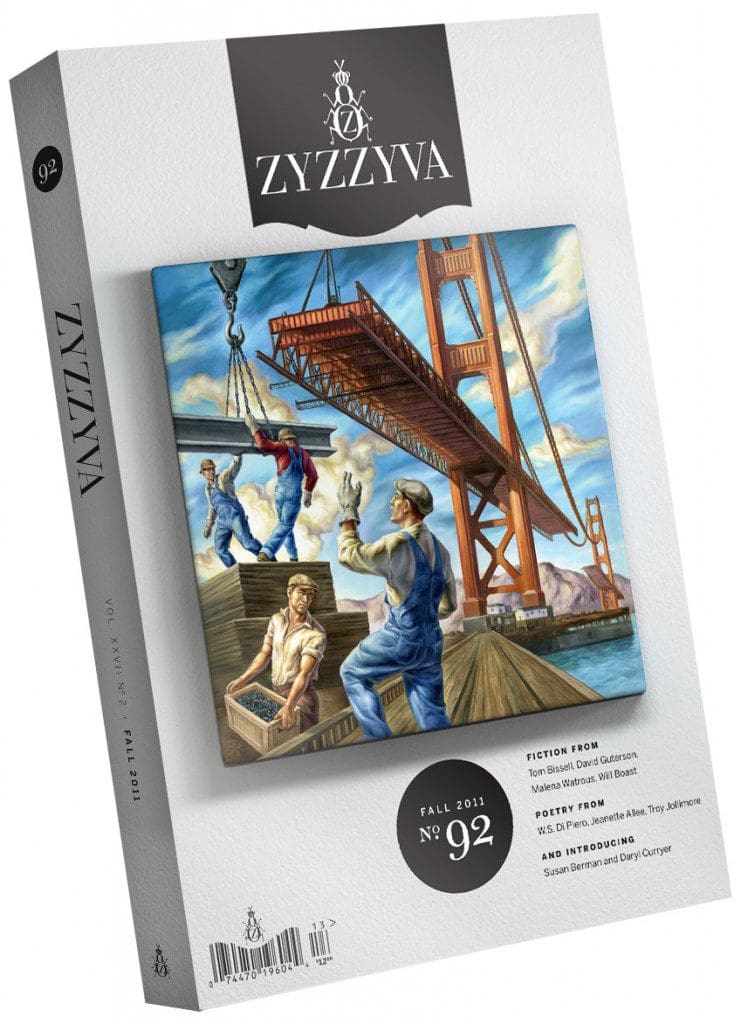 Maarit’s father had given her a dog because he hoped it would provide her with something to do. It was true that Maarit did not have much to do, though she always felt busy, which was, perhaps, a natural consequence of waking up daily at 3:00 p.m. Most of her activities involved spending her father’s

San Francisco writer Malena Watrous first novel, If You Follow Me (HarperPerennial), was published last year. Her stories and essays have appeared in The Alaska Quarterly Review, The Believer, GlimmerTrain, The Massachussetts Review, Salon.com, StoryQuarterly, TriQuarterly, and elsewhere. She now works for Stanford as a head instructor in the Online Writer’s Workshop.

“Princess,” which appears in ZYZZYVA’s Fall issue, is a ruefully wise story about parenting — its joys, its limitations — couched in that most seemingly innocuous of events: a child’s birthday party. The following is an excerpt from Watrous’ story.

There once was a baby born in a shoe, wedge, open toe open heel, Florida balmy breezes, monsoons, then a single wide white trashed trailer, inauspicious plastic laundry basket her manger in that backwater Bethlehem. She grew out of place fast, had the twins, bought a rip-off Gucci bag in Times Square, raised her kids in its deep pockets, leather and fringe, no bondage buckles, ‘til they were grown and unemployable. They slept days, trolled the nasty nights, kept their St. Christopher medals, she’d given, hidden. She couldn’t find her post trauma Viet vet in the dark in the handbag, […]

David Guterson, who lives in Washington with his wife and children, is the author of the story collection The Country Ahead of Us, the Country Behind and the novels The Other, Our Lady of the Forest, East of the Mountains, and Snow Falling on Cedars, which won the PEN Faulkner Award. His new novel, Ed King (Knopf), will be published in October.

“Politics” is set among the Moaist strikes that shut down Nepal in 2010 and left thousands of tourists caught in the middle. In Guterson’s story, an American man attempts to help out his ex-wife (“technically she was still his wife because they hadn’t signed divorce papers yet”), a journalist who has been seriously injured in a car crash. As he tries to make his way by foot to her hospital, he confronts the mayhem and poverty around him. “He decided to pretend these child-beggars didn’t exist,” Guterson writes, “that he didn’t hear or see them, but that was even more infuriating, because it embroiled him, now, in self-examination, and in pondering the conclusion he was rapidly coming to — that you couldn’t win in a case like this. That no matter what you did, you were wrong.” The following is an excerpt from “Politics.”

Will Boast was born in England, grew up in Ireland and Wisconsin, and now lives in San Francisco, where he also works as musician. A former Stegner Fellow, his fiction has appeared in Best New American Voices 2009, Narrative, and other publications. His story collection, Power Ballads (University of Iowa Press), comes out in October and has drawn praise from Yiyun Li, Tom Franklin, and Ann Beattie.

“Lost Coast” is a sneaky story about revenge set in perhaps the most unlikely of places: the indie music scene. Boast effectively evokes the noirish hues of San Francisco and masterfully conveys the craftsmanship of the music at the heart of the piece. The following is an excerpt from the story, which appears in ZYZZYVA’s Fall issue.

Can you surrey? Can you picnic? Surrey down to a stoned soul picnic… And from the sky come the Lord and the lightning. -from the song “Stoned Soul Picnic” by The 5th Dimension They hit the streets, those Single gents spilling out of the cleaners All partnered up & promenodding Escorting their dainties. O You Shirtwalkers! Drop her, she’s just a thin wire of feigned domesticity Nothing but a clothes hanger. The press and starch of your city life Is blanding your manly. Don’t you see me passing? I want to slap my hands against your plackets & Pop your […]

I can’t not keep coming back to this place that’s not a place, its pepper trees, olive trees, lilac, narcissus, jasmine, here with me and mock orange and eucalyptus and working words that fill in others, an earthquake-enlivened rose bush, pollarded plane trees and sycamores, and cypress flat-topped by sea wind. Here are Interstate concrete, desert dust, hardpan, here are cobblestones and woven bricky streets, Death Valley’s salt flats, here are red granite domes that cool at night and groan. They are here. The imagination rushes toward the world in fear of forgetting anything: witness and invent, it says, and […]

San Francisco writer Jill Storey has been published in Salon, the Washington Post, and Ms. Magazine, among other publications. Her essay “Sight Lines” appears in ZYZZYVA’s Fall issue.

A meditation on what it means to have monovision (“What I see can perhaps be described as what others see when viewing a movie or photograph.”), “Sight Lines” is a thoughtful exploration about seeing the world in two dimensions, and of the philosophical and cultural inquiries her condition raises. “Real is also the word my husband used when we saw a 3-D movie recently,” Storey writes. “To me, it looked like any other movie. So if the three-dimensional world is real, does that make my world unreal?” The following is an excerpt from her essay.

The white of the ocean’s foam-froth is said to contain all colors, while the sea’s green-blue depths are composed of the colors our ancestors could not bear. Or could not bear to let go: the story varies with the source. And the shadow that lies on the sea is cast by no flying or orbiting thing, but by the ocean floor where it blocks the light from the sun at the heart of the earth. These things, however they might terrify, are nonetheless true. I will hold you through the shivers and terrors. I will kiss the unholy curve of […]

Susan Berman is a writer in Los Angeles, where she also works as a Spanish interpreter. Her story “Lust for Life,” which appears in ZYZZYVA’s Fall issue, marks her first fiction in print.

The tale of a toxic love affair, Berman’s story is set in ’70s New York City, amid aspiring artists and youthful passion. How self-destruction can be confused for “passion” is one of the story’s concerns. The other is an appreciation for hope and beauty amid the most unpromising of scenarios. The following is an excerpt from “Lust for Life.”

Tom Bissell, who lives in Portland, Oregon, is the author of several critically acclaimed books, including Chasing the Sea: Lost Among the Ghosts of Empire in Central Asia (2003),
God Lives in St. Petersburg and Other Stories (2005), The Father of All Things: A Marine, His Son, and the Legacy of Vietnam (2007), and Extra Lives: Why Video Games Matter (2010).

His story for ZYZZYVA’s Fall issue, “Love Story, With Cocaine,” is a humorous portrayal of the ennui-soaked relationship between a young woman in a nameless Baltic European country and her American (platonic) boyfriend. Cocaine is part of their scene. Video games are in the background, too. And a highly strung greyhound is a constant companion. The following is an excerpt from Bissell’s story.

Handcuffed and head down in the tank two and a half minutes behind the black velvet curtain, deadbolts across the opening and nothing but the sound of water filling my ears, I discover myself on the verge of a possible mistake.  This is to say I meant for Anatole to leave me bound this time round; the longer the lapping occurs in my head, the closer I come to the governance of happiness.  I am truly singing in here, not drowning but singing, and if only you could hear me strumming in this little ocean of sleep, you would know […]