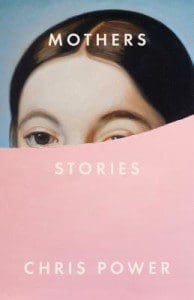 The characters in Mothers (287 pages; FSG), the debut story collection by London writer Chris Power, occupy tenuous positions in their personal lives. Many of the ten stories here hone in on the bitter resentments and petty debates that arise when a romantic relationship has barely formed or, alternately, reached its breaking point. In “The Crossing,” protagonist Ann comes to regret her backpacking weekend with recent lover Jim:

Several times, in the weeks since she had met him, Ana had thought Jim was telling her what she had wanted to hear. Even before she agreed to this weekend away the trait had been irritating her…She had wanted to sleep with him as soon as she saw him, leaning against the kitchen counter at a party in a big, dilapidated house in Chalk Farm. And she had slept with him, but now she wished she had left it at that.

As one might expect, the backpacking excursion doesn’t end well for Jim; his attempt to restore some of his masculine pride and put himself back in Ann’s good graces leads to disaster at a swift-moving river crossing.

Stephen, the narrator of “Portals,” visits Paris to stay with an old acquaintance, a charismatic Spanish dancer who invariably wins the affection of the men who cross her path (including Stephen). As various would-be gentlemen callers vie for Monica’s attention, the brewing rivalry among them sets the stage for a violent altercation at a French drum ‘n bass club:


Michael went down so fast it was like I made him disappear. A space cleared around us. Monica—who I never saw or spoke to again—looked at me like she didn’t even know me. Which she didn’t, I realized. I laughed. It was so ridiculous and sad.

And in perhaps the collection’s strongest piece, “Above the Wedding,” a young Englishman named Liam travels to a destination wedding in Mexico City for the purposes of confronting the husband-to-be, with whom he shared a brief physical tryst and still nurtures feelings for:

As the security light above the garage flicked on, frosting the driveway white, Liam called his name.
Miguel stopped, turned.
“You’re going to have to talk to me some time,” Liam said.
Miguel smiled, not unkindly. “No I am not, Liam,” he said, and turned and walked into the darkness.

It is the “unkindly” in that last sentence that hurts the most, and throughout Mothers Power exhibits a similar knack for detail in his depictions of the way people navigate disintegrating relationships, whether due to fading sexual chemistry or the barriers put up by mental illness. An eponymous sequence of stories appears at the beginning, midpoint, and end of the book, each installment focusing on the life of the troubled Swedish native Eva. The opening story relays her childhood outside of Stockholm, while later pieces touch on her struggles with depression and failed attempts at maintaining a family. Power lets some of the connections among the stories reveal themselves slowly, and each one can comfortably stand on its own, though the final two chapters are united by the imprint of Eva’s physic pain: “When it comes it’s like all the rules change,” she explains. “You feel everything falling apart and coming back together in new shapes, shapes you can’t understand. You lose the ability to make sense of anything.”

A couple of the stories in Mothers register as outliers: “The Colossus of Rhodes” ruminates on the nature of storytelling itself, as the narrator admits to exaggerating the details of an uncomfortable incident from his childhood in order to express the anxiety of being a parent in a world where it is often impossible protect one’s children (“…I can’t help but wonder if the same thing happened to them, would I want to know? And if I knew, what then?”). Elsewhere, “Johnny Kingdom” follows the hard luck of an English stand-up comic and family man attempting to make a living by impersonating the fictional comedian Johnny Kingdom (a clear stand-in for the late Rodney Dangerfield). Power cleverly utilizes the concept of a comic recycling a deceased comedian’s material to examine writer’s block and the struggle to find a creative voice that is uniquely one’s own:

Sometimes he was asked, with genuine puzzlement, why he was doing someone else’s bits—a crime in comedy, but complicated in this case by the fact that he wasn’t trying to pass someone else’s line off as his own, he was only performing someone’s entire act… He was as uncomfortable with what he was doing as anyone else was.

Mothers proves an elegant collection, touching on a host of issues deeply ingrained in our modern experience: the fragility of human connection, the impulse to travel, and the painful ramifications of mental illness, among others. Power’s prose is spare and exacting, excising the needless word in pursuit of emotional truth. Mothers proves a rewarding experience for the lover of quiet short stories that speak volumes.