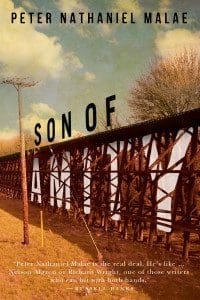 We live in a strange, weird country (obviously). We don’t see, or want to see, what’s directly in front of us. Why bother when we have phones?

Oregon author Peter Nathaniel Malae has been chronicling the untold stories of class and race, and familiar, timeless tales of family and heartache, since the publication of his first novel in 2010, What We Are, which depicts a young Samoan-American drifting through conflicts about immigration, identity and meaning. (As his protagonist muses, “I can find beauty in the gutter, as long as it’s empty of another heartbeat.’’)

The former Steinbeck and MacDowell Colony fellow made his debut with Teach the Free Man (2007), a series of linked stories about the California prison system (the title is from Auden: “In the prison of his days, teach the free man how to praise’’), and later wrote Our Frail Blood (2013), about the conflicts of an Italian-American family and their first-generation children.

In his latest novel, Son of Amity (Oregon State University Press; 216 pages), Malae stakes out even more ambitious territory, depicting the interlocking saga of three lives in rural Oregon: Pika, a half-Samoan ex-con bent on avenging an attack on his sister; Sissy, the sister who rises from the ashes of her past (her transformation, and insistent purity, puts me in mind of the Lars von Trier film “Breaking the Waves’’) and Michael, a damaged Iraq War vet who marries Sissy on his return but can’t shake his own demons—or Pika’s reproaches.

It’s a canvas that calls Steinbeck to mind (perhaps the Steinbeck of East of Eden) as well as the sad sagas of Ken Kesey (Sometimes a Great Notion) and Don Carpenter (Hard Rain Falling). This is Oregon, but it’s a far cry from “Portlandia.’’

His dissection of the social cost of unintended consequences is devastating, as when he describes Pika’s arrival in Amity:

“He came out of the head of the town now, thinking on how culturally locked down this place seemed. Not a single brotha or chino but especially not a single hamo in sight … If this place was like Cali at all, they were probably out in the fields already, bent back at the hottest point of midday, grapes on the vine, corns on the husk, beans sewn like tapestry through the diamond holes of the fence…


“And crystal meth. Pika could feel it – the ma’a was here. A few shirtless tweaks with their pants falling off were strewn across the road, speed walking with hummingbird feet, yelling out to one another as if they were football fields away, and not side by side.’’

We recently spoke via email to Malae about his new novel:

ZYZZYVA: You grew up in working-class environments in Santa Clara and San Jose. Who were your literary influences? What set you on this path?

PETER NATHANIEL MALAE: For me, my father was the original story-teller. Although he never showed me any literary novel to read, never pushed lit stories or poems on me, his whole life was an epic novel: Achillean, tragic, and true. I watched, I know.

My first teacher to have brought a lit book into my horizon, though, was Father McFadden, who was something of a legend among Jesuit educators throughout California. The school he taught at was anomalous to my experience, though: I was the first Samoan kid to attend in its 160-plus-year history, and I was definitely the most violent. However, Father McFadden was a hell of a man. He had me reading the fucking Iliad at 13. He forced me, and all the boys, to read, write, and present on our own, akin to a military academy. That year we read Homer, Grapes of Wrath, Catcher in the Rye, Julius Caesar, and a book called April Morning, about a boy joining up to fight in the Revolutionary War. I was too silent, too angry and macho to tell anyone about it, but McFadden, though he might’ve never guessed, had scored a true devotee: literature was where it was at for me, secretly, and I was a lifer.

Z: How did you keep the different narrative threads in Son of Amity together?

PNM: To a large degree, I believe in writing disinterestedly. It has nothing to do with losing any passion for the story; in fact, in my view, it’s a way to secure the passion for the story by putting distance on something that’s whole already, without you coming in to wreck it.

Getting out of the way of the light, then. That’s [John] Gardner.

So: from the onset, I’m looking for distance, not so much from the characters or from myself, but from the narrative in its entirety, a sort of drone hovering overhead that can hopefully see a hell of a lot, and which, more importantly, won’t miss the vitals of detail: eccentricities and subtleties and nuances and idiosyncrasies that would otherwise get lost from the ground, but which can straight wrap a character for the reader. Being too close is a risk then, myopic, maybe even injudicious, given that any character you presume to write must firstly and thoroughly and lastly be human.

With Son of Amity, this distance helped in another way: three characters have ruined one another before their story with the boy [Sissy and Michael’s son, Benji] actually starts. By keeping distance from their stories—meaning that I didn’t enter the narrative with an overt political or cultural bias—I was conversely freed to write each character commensurate to the weight of their respective experiences. Pika’s story is closer to my own, but if I had weighed in too heavily on his behalf at the story’s beginning the strength and horror and conflict of Michael’s story would never have come off enough to bring these two together equally, and thus believably, since the whole premise of their combat, in a way, is one character saying, “I’m not impressed that you’ve fought five tours in Iraq,” and the other saying, “I’m not impressed that you’ve done five years in Quentin.” That’s good tension, philosophically, culturally, morally, etc.

Z: What were the challenges of moving from California and setting your story in the relatively unfamiliar milieu of the Northwest?

PNM: It took me five years of living in rural Oregon to write about it. Being an urban kid from the brownest and most diverse part of America, I was tripping a little, not getting the place enough to write the place with that kind of authority you got to earn. It’s going to sound highbrow or elitist or whatever, but to me writing “place” is a moral matter, in which if you’re going to presume to write the stories of a group of people, you need to get the stamp of approval of those very people once it’s written—or you’re in the wrong. That’s because they’re the ones who suffered the story. Straight up. They need to confer their blessings. That, in turn, subsumes every other authenticator out there since others would obviously know the story less than the person who’d lived it.

In my county, which was the second poorest in Oregon during the time I wrote the book, the dichotomy between wealth and poverty is startling. Topographically, culturally, politically. When Sissy is running up to Michael’s farm, she “crosses…this divide between money and nothing,” and then re-crosses back into the disaster of her inheritance. The wineries brought in money in the early ‘00s, just as the logging industry was dying out, leaving behind fourth- and fifth-generation working-class Oregonians with nothing to do in these towns except play video games, tweak on meth, or join up [the military]. Oregon, behind Mississippi, had the highest enlistment rate during this same year.

Lastly, Amity is cousinly to the other Yamhill County towns of Gran Ronde, Willamina, Lafayette, Sheridan, parts of Dayton, each of which have been hijacked by a politics it didn’t see coming. I had to live here with the Confederate flags at the end of the street, with dime-dropping snitches living in tweaker houses through the neighborhood, had to fish here with the rednecks and appreciate their “gun culture,” which is a means to get food during hunting season, learn the history of the nomenclature traced to the South (they’re poor Southerners, largely, who’d relocated after Reconstruction, unhappy living with free blacks; some even swore to return “home” for “Dixie”), understand the family farming culture of Oregon (the opposite of big corporate farms of Central Valley), work the fields with both whites and paisas, etc., before I could write anything set in rural Oregon.

I’d thought, for a long time as a Californian, that Drugstore Cowboy (a favorite movie of mine) and the novel Fight Club were Oregon; couldn’t be further from the truth: that’s Portland. And Portland may as well be 2,500 miles away from Amity.

Z: Who, if anyone, is your ideal reader?

PNM: Well, I don’t have one. I want to be able to pull up alongside anyone, and somehow drop into their narrative consciousness. I’ve lived a crazy life, disparate and violent and intense, and seemingly impossible culturally, and while that doesn’t make for an easy story to tell, it means I can see the story in someone else’s eyes, if I look close enough, and back far enough to that point right then, right there. I’m trying to put down stories that matter, in the American tradition of Hemingway, Steinbeck, Baldwin, Faulkner, Bellow; and in the world tradition of Oe, Dostoevsky, Dickens, Sebald, etc. Still, however much I can manage, I want to break out of the tradition, too, put a little stamp of my own on the page. It feels awkward to write that because the long haul—at which point you’ll be lucky if just one person says what you want them to say about your work—is achieved step by step, each day focused on the integrity of a single sentence, and thus far far away from the larger journey itself.