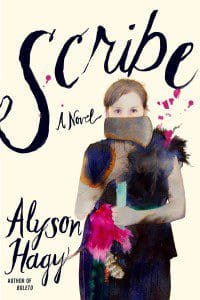 Alyson Hagy’s latest novel, Scribe (157 pages; Graywolf Press), opens in a fantastical country stricken by lethal fever and civil war. The economy operates on barter and trade, and many citizens have hardened their hearts to meet the struggles of this new world. This includes the unnamed, mystical protagonist, who is known for her great writing skills yet feared by many. She is the definition of a loner, her only company a group of stray dogs and the various nearby settlers whom she seldom engages with; that is, until a stranger who calls himself Hendricks enters her life.

He pays the main character a visit and humbly requests her skills be put to use in writing a letter––and delivering it for him. Initially, she refuses this unwanted task, but ultimately agrees (with some conditions, which Hendricks thankfully complies with).


In the process of performing this service, she finds herself challenged physically, mentally, and even spiritually. The memory of her sister’s tragic death arises in ways the protagonist can’t face on her own, and she begins to regret accepting the mission, leading her to anguish over whether she should renege on her promise to Hendricks.

In the end, she finds it too difficult to reject the task she agreed to complete. Hendricks has become a part of her personal life (on one occasion, she returns home and finds him in her house without permission), which is not to say she is delighted to suddenly have such an intimate friendship with a stranger. She continues to express a desire for distance between herself and the rest of the world, including Hendricks. Yet this unique man brings the protagonist to question her hardened attitude, not only toward him but toward her community at large.

This opening of the heart is especially powerful given the novel’s all-too-relevant themes of migration, authoritarianism, and the way our history shapes who we are today. In the letter, Hendricks writes, “I have been made fat from the labors of others, from the kindnesses and charities of those who meant me no harm. I have often meant harm. I am carved from the rock of it.” (The phrase “I have often meant harm” is especially striking, not only for its brevity but also for the contrast between it and the prior sentence about love.)

Scribe speaks to many of our contemporary issues, including the history of the land we in the United States inhabit. It provides a unique perspective on the times we live in and perhaps even offers some foresight into the future. Following the protagonist’s humble and selfless change of heart, Hagy suggests what our relationship to those around us should look like.