The Book Club of California—with a 102-year history of fine letterpress publishing and support for hand-press printers—is a bibliophile’s delight and refuge. Sedately described by someone on its website as “a non-profit organization of people who take pleasure in fine printing related to the history and literature of California and the western states,” the San Francisco organization has an impressive and unexpectedly adventurous 3,000-volume collection, which ranges from a cuneiform tablet to a 15th century incunabula to a one-off book printed with alphabet cereal. The largest group for book collectors in the country, the Book Club also hosts exhibitions and literary events at its handsome Sutter Street offices and reading room. If you love the book as an object, as a talisman, as a link to the past, find your way there.

Two recent publications by the Book Club depart from their usual publishing program: the anthology Poetry at the Edge: Five California Poets (discussed below), and a story collection by Monique Wentzel, a Stegner Fellow at Stanford, called The Woods Were Never Quiet. Designed and printed by Jonathan Clark of Artichoke Press, with illustrations by Jessica Dunne, the book itself is a good match for Wentzel’s direct gaze and her steely narrative control. (Wentzel’s story “Modern Speedwash” appeared in ZYZZYVA Issue No. 99.) 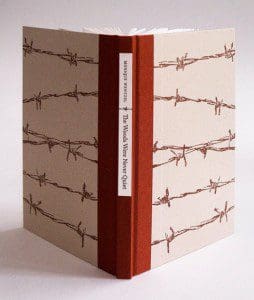 The Book Club rarely publishes original fiction. “The idea of looking for an emerging author was mine,” Robert Trujillo, the chair of the Book Club’s Publications Committee and head of special collections at Stanford University Libraries, explained by email.

“I brought the suggestion to the full committee, arguing that with so many creative writing programs all over California…there had to be some new talent writing about experiences that were Californian, and the Book Club of California should try to identify these authors and consider their work for publication. The committee liked the idea, so we began soliciting work from emerging writers in various creative writing programs around the state.”


ZYZZYVA: What’s a typical day for you at the Book Club?

Jennifer Sime: A typical day is hectic! In addition to planning parties and overseeing a dynamic series of programs, exhibitions, and events, each day brings general administrative and business tasks to be accomplished, correspondence to keep up with, and regular board and committee meetings that keep the Book Club’s small staff and volunteers busy. We are also open to the public from 10 a.m. to 5 p.m. each day, so frequently receive visitors who stop by to see an exhibition or take a look at our publications.

JS: Our publications are a major part of the work we do. 2014 marked the centennial of our publications program, and to date the Book Club of California has published 233 books.

Z: The November reading for Poetry at the Edge: Five California Poets was fantastic. Also packed! Do you publish a lot of poetry?

JS: Actually, this is the first collection of poetry published by the Book Club in over sixty years. We’re very proud of it. It was edited and designed by Carolee Campbell of Ninja Press—her work on this was an incredible gift to the Book Club—and features the work of five leading contemporary poets, including United States Poet Laureate and MacArthur Fellow Kay Ryan, as well as Joseph Stroud, Gary Young, Martha Ronk, and Michael Hannon.

The poetry is remarkable in itself, and those familiar with the work of Carolee Campbell will know that any publication she has a hand in aspires to the highest standards of excellence in materials, content, and craftsmanship. Every component of the book is carefully considered.

Z: So how did you come by this job?

JS: My background is in art history. I worked in curatorial positions at both the Baltimore Museum of Art and San Francisco Museum of Modern Art. I switched to editing and publishing when my children were young so that I could have a more flexible schedule. In 2011, I began working for William Stout Publishers as managing editor, and it was Stout who encouraged me to apply for the Executor Director post here. I was brought in specifically to expand the Book Club’s audience and form new partnerships with other cultural and book-centered organizations around the state.

Z: Who joins the Book Club?

JS: We’re a diverse range of people who have in common a love of books and a particular interest in California and the West. One thing that is especially interesting about the Book Club is that women were admitted from the start—which was rather unusual for 1912, when the Club was founded. The well-known philanthropist, feminist, and suffragist Phoebe Apperson Hearst and San Francisco artist Florence Lundborg were among some of the Club’s earliest members.

The Book Club’s members tend to be people who both delight in learning something new and also appreciate mastery—of craft and technique or a field of study. Our members are fine press printers, bookbinders, typographers, illustrators, photographers, designers, as well as librarians, historians, scholars, book collectors, publishers, and booksellers. Membership is open to all, and we offer discounted rates for students and those 35 and younger.

Z: Do you have a favorite supporter or member?

JS: There are so many, starting with our librarian Henry Snyder who, at eighty five, inspires (and sometimes exhausts) me by his constant efforts to build, catalog, understand, and share the Book Club’s collection of books, pamphlets, and ephemera related to the history of the book and fine printing in California. There is also Book Club board member Mary Austin. She and her husband, Brewster Kahle, epitomize for me the forward-thinking intelligence, vitality, and creativity of San Francisco. (The Austin/Kahle Foundation makes possible both the Internet Archive and the San Francisco Center for the Book).

Another truly remarkable Book Club member is Malcolm Margolin, founder of Heyday Books, who has made so many important contributions to California history and our understanding of Native culture. (This year marks the 40th anniversary of Heyday and to help celebrate, the Book Club hosted a Litquake event: “A Tribute to Malcolm Margolin” featuring Kim Bancroft, L. Frank, Andrew Lam, Rebecca Solnit, Oscar Villalon, Charlie Winton, Paul Yamazaki and, of course, Malcolm himself.)

But there are also all of the members who regularly show up and engage with our public programs, or those who live outside the Bay Area or even in another state who stop by the Book Club when they are in town to say hello and view our current exhibition. All of these members are what the Book Club is really about—community, collaboration, the pursuit of excellence, a respect for the value of history.

Z: What kind of responses do you get from visitors to the Book Club?

JS: On a regular basis, people walk in to the Book Club for the first time to experience a delightful sense of shock—“What is this place?”—and wonder why they have never heard of us before. This is both fun and frustrating. I think we are one of San Francisco’s best-kept secrets, and it’s a pleasure to be around when people discover us. But we are also a public institution, and a not-for-profit. We need the support of a broad base of members in order to sustain our dynamic series of public programs, and we would like our publications, library, and ephemera collection to be available to students, scholars, printers, and the general public to help make better known the remarkable history of the book in California.

One thought on “A Haven for the Printed Work: Q&A with the Book Club of California’s Jennifer Sime”