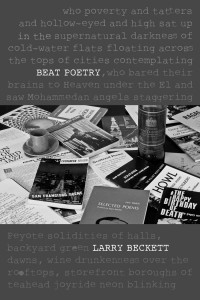 The beat goes on.

Larry Beckett, the one-time songwriter (he famously collaborated with the late Tim Buckley) has long been immersed in an ongoing poetic project called “American Cycle,’’ which takes an ambitious look at the folkloric past—from Paul Bunyan and P.T. Barnum, to Chief Joseph and Amelia Earhart and other figures from the “old weird America.’’

His latest book, simply titled Beat Poetry (Beatdom Books, 150 pages), tries to put into meaningful perspective the oft heralded if frequently over-hyped revolution in American poetry that took birth from the vernacular modesty of that good obstetrician William Carlos Williams and incorporated the spare eloquence of forebears like Li Po.

The author is eager to avoid the obvious.


“From the presses of the academy come only Beat biographies, sociologies, encyclopedias, interviews, photographs…” he writes. “This is the missing book, […] ready to trace the roots and branches of the poetry of those streets,’’ of the battle cries and quieter voices heard from The Co-Existence Bagel Shop and Fugazi Hall.

He gives close, if not always entirely convincing readings of the antecedents of poets such as Lawrence Ferlinghetti, tracing the influence of Mallarme and his typographical innovations, as well as the proletarian poet Jacques Prevert, who seems closer to the actual literary spirit of the celebrated City Lights nonagenarian. And he resurrects lesser-known authors, including Philip Whalen, Bob Kaufman and the late, great Lew Welch, from their hidden status behind the imposing shadows of Ginsberg and Corso. (Though one would have liked to have seen Jack Spicer in the mix, as well as at least one female poet—say, Lenore Kandel or Diane diPrima. Another book, perhaps.)

The argument he makes for the greatness of Kerouac’s poetry (to be fair, Ginsberg, among others, has made it before him, and more aggressively) seems diminished by the actual examples chosen: In “Visions of Cody,” the prose seems more successfully “poetic” than the jazzy but ultimately meandering selection from “San Francisco Blues.”

But Corso’s madly inspired “Bomb,’’ written in the late ’50s, is as relevant—make that essential—in these times as the daily bludgeoning of the evening news (not to mention the hand-held device.) Corso’s incorrigibly endearing extravagance and Blakeian identification with the poetic power of excess, breaks through the “I-Thou-ness” into another world of comic compassion:

Beckett nicely appraises the work of John Wieners, author of The Hotel Wentley Poems, which is about his inner and outer adventures while living in a flophouse. These lines, from “a poem for vipers,” speak for themselves:

The poem
does not lie to us. We lie under
its law, alive in the glamour of this hour
able to enter into the sacred places
of his dark people, who carry secrets
glassed in their eyes and hide words
under the coats of their tongues.

Beckett provides careful readings of all the texts, a kind of New Criticism for a once new form of expression that one hopes can find new life. But his sympathies are clearly with the underdogs: San Francisco Surrealist poet Philip Lamantia and North Beach’s Bob Kaufman, who took a vow of silence against the depredations of the angry planet.

He quotes Kerouac’s “beat’’ formulation not just beatific but “beat, meaning down and out but full of intense conviction,” although the jazz sense of staying within, and identifying with the moment of the beat—the pregnant pause, as well as the soaring solo—seems equally apropos.

Beat Poetry is a work of serious scholarship, attempting to rescue, and re-appreciate, the work of its subjects by putting them in historical context. But one senses that it’s also a way for Beckett to come to terms with the roots and branches of his own American songs. Like Orpheus, if he ends up digging even deeper into his soul, we will surely dig the results.

2 thoughts on “A Careful Reading of a Literature’s Underdogs: Larry Beckett’s ‘Beat Poetry’”